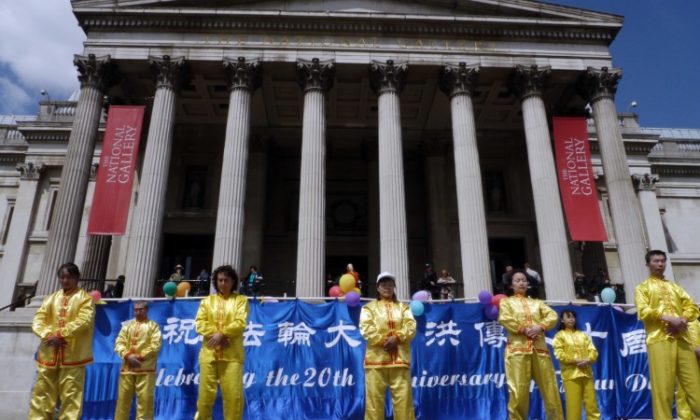 In London’s Trafalgar Square the Olympic countdown clock reads 75 days. Above it on the North Terrace a celebration of a different kind is taking place. Yellow-costumed and serene, Falun Dafa practitioners are meditating under skies that are finally blue, after months of rain.

This is World Falun Dafa Day, a celebration of the spiritual practice that was introduced to the Chinese public in 1992. It has since been taken up worldwide, with practitioners in an estimated 114 countries.

Ling Dee, secretary of the Falun Dafa Association UK, says that she benefited from the practice when she started in 1997. “My family in China practised it and found it was very effective for improving health so they asked me to try it,” she said. “I had some health problems like a stomach ulcer or some skin problems; they all went within three months. Also it changed me inside out, making me a happier person and changed my view of the world.”

Mrs Dee also said that the Chinese regime initially found Falun Dafa beneficial. “It’s just unfortunate that because of the growth of the practice in July 1999 they banned it and started persecuting it. However, no matter how brutal the persecution is, Falun Gong has never been stopped,” Mrs Dee said.

Since July 1999 the Chinese Communist regime has persecuted Falun Dafa, with more than 3,500 people having been tortured to death. But, said Mrs Dee, for this 20th anniversary of the practice, they would like “the world and more people to know how beautiful Falun Dafa is”.

Passer-by Carmen Todd saw the demonstration of the slow moving qigong exercises in Trafalgar Square and was motivated to sign a petition calling for an end to the persecution. She said she thinks it’s important for people to have freedom to do what they want. “The message—truthfulness, compassion, and tolerance—what harm can that do to anyone?” she said.

Artist Chelsea St Pierre was also in Trafalgar Square with her children. She saw the demonstration and likewise signed a petition. “We just thought that in London we get to do whatever we like,” she said.