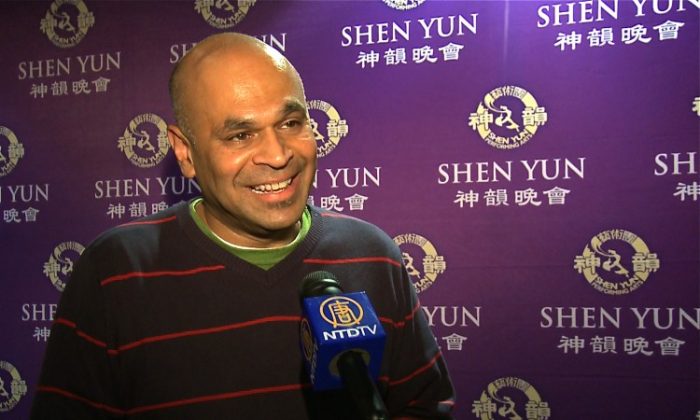 Rogers TV station manager Jake Dheer said he was deeply impressed by the sights and sounds of Shen Yun Performing Arts after seeing the classical Chinese dance and music production at the Living Arts Centre in Mississauga on Friday night. (Courtesy of NTD Television)
News

MISSISSAUGA, Canada—Shen Yun is a visual and auditory phenomenon, according to the man responsible for a television channel in Mississauga.

“It’s absolutely phenomenal. It is beautiful visually, and a story that is told of 5,000 years old. The culture and dance, the acrobatics-everything, it was just beautiful from start to finish,” said Jake Dheer.

Mr. Dheer runs Rogers TV channel 10, a job he’s won awards for in addition to his long history of community service. In 2005 he was named Mississauga’s Citizen of the Year.

Some 700 guests attended a tribute dinner in his honour, raising $150,000 for summer camps for children with intellectual disabilities.

Mr. Dheer said the show was awe-inspiring and he was impressed by the combination of elements on stage.

“The visuals, that just captures your eyes. It’s just beautiful. I have to tell you the music is just phenomenal. I think the orchestra is excellent. Everything, visually and the audio, it’s just absolutely beautiful.”

Mr. Dheer has been working in television for 15 years. He reflected on the amount of work that would have to go in to produce something on the scale of Shen Yun.

“I think this has taken years to put together because there are so many aspects of it. And each and every part is so well choreographed and synchronized. And it’s great storytelling without any voice. To do that, and in colour, and in style, it is just beautiful. Absolutely beautiful. I just don’t have words for it. It’s phenomenal,” he said.