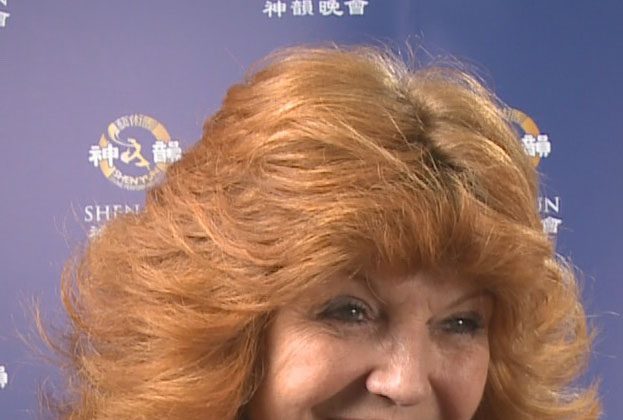 LONDON—Rula Lenska, British star of television, stage, and screen, has a wealth of experience when it comes to knowing what makes a great performance. “Shen Yun was absolutely wonderful, absolutely wonderful,” Ms. Lenska said, after attending the second performance of Shen Yun Performing Arts at the London Coliseum on Friday, April 13.

Famous in the 1970s for starring in the BAFTA award-winning, popular British television series “Rock Follies,” followed by numerous television and film appearances up until recently, Ms. Lenska is today a regular performer on the West End stage.

Ms. Lenska was bowled over by the opening scene [i]An Era Begins[/i], described in the programme book as: “The curtain opens to reveal a regiment of celestial soldiers, preparing for a battle between good and evil.”

“When you saw everybody drumming, I thought that was so exciting,” she said.

Based in New York, Shen Yun showcases the best of 5,000 years of traditional Chinese culture. “At the core of Shen Yun’s performances is classical Chinese dance with China’s numerous ethnic and folk dance styles rounding out the evening,” states the Shen Yun website.

Ms. Lenska was impressed with the level of artistry of the dancers. “The colour, the precision, the training, is just absolutely exquisite, and they are so disciplined, and so talented,” she said.

Originating from Confucianism, Buddhism, and Taoism, traditional Chinese culture promotes values such as benevolence and respect for the divine. The recurring theme conveyed in Shen Yun of good always triumphing over evil particularly touched Ms. Lenska, who identifies herself as a Buddhist. “The spiritual pervasion for me had special meaning,” she said. “It’s a worldwide message.”

“When we put ‘Shen’ and ‘Yun’ together it’s about the grace, compassion, and sublime beauty of heavenly realms that are shown through the subtlest expressions and gestures of our dancers,” explains the programme book.

“I loved the way that the background was used in this magical way, when the Buddhas and the holy people came down from the skies or from the mountains and then suddenly appeared on stage. It was beautifully done,” Ms. Lenska said.

Ms. Lenska, who has visited China twice, summed up her appreciation for a wonderful evening. “Exquisite, xie xie [thank you in Mandarin]!”