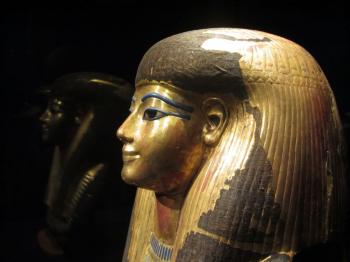 Tutankhamun’s Last Trip: You Will Be Changed

This is the last time that Egypt’s precious artifacts will tour. Once the construction of the Grand Egyptian Museum, situated at the Great Pyramids in Giza, Egypt, is completed, the treasures will go back, never to leave home again.

But back to all that gold—there’s lots of it, and it is mesmerizing. In ancient Egypt, gold was believed to be “the flesh of the gods” and rightly so.

In the Western Christian tradition, the religious icons often have a gilded background symbolizing heaven—adding an extra dimension of splendor and mystery—with Christ and the saints manifesting out of it.

In Egypt, the king and his family are made of that very stuff, coming out of the darkness—solid, imperial, and incredibly content. Their expressions are unexpectedly evocative, and it seems as though they all have a sort of “Mona Lisa smile.”

Take for example the head mask of Tjuya, Tutankhamun’s great-grandmother: She’s definitely smiling. Then there’s the face of Nefertiti. Her eyes and eyebrows, which would normally be filled with lapis lazuli, are missing; her nose is broken; and yet there’s a glint of a smile and an expression that really stops you in your tracks.

It is worth slowing down a bit and spending time in front of these objects. You’ll start to notice little things. The dim lighting helps with the mood as well, but more than that, it has the surprising quality of reflecting the images of the artifacts onto the surrounding glass in a sort of infinite visual echo descending into darkness.

This was a happy discovery—even for the exhibition’s creative director, Mark Lach. “It’s important not to be afraid of the word theatrical or dramatic, but to never let that overwhelm or upstage the objects—the objects are the real focus,” Lach said.

In designing the way the artifacts are displayed, he recognized the need to give them a proper context. “You want to make sure that when you add theatrical touches … they don’t get in the way of the appreciation of the artifacts. But so many people come to the exhibition, and they talk about going to Egypt, maybe some day, but maybe they’ll never make it.

“Today is their visit, and if that’s the case, you want to give a little background, a little context. That’s why some of those big murals at the beginning of the exhibition put you there,” Lach said.

The point is that seeing the exhibition is so directly, viscerally (excuse the pun!) satisfying that even if you don’t know and don’t necessarily care whether King Tut died of an infection from a fractured knee or that his father Akhenaten was the first to introduce monotheism to Egypt, you will be changed.

The sculptures stand as glorious testimony to the Egyptian artists who, even with their stylized techniques, managed to imbue so much life and meaning into their creations. You can’t help but think that they poured all their energy, gold, vibrant colors, and exotic materials into each creation as if to overcompensate for the inevitably diminutive mass of monochromatic mummified flesh.

And about that, we must mention something about the ancient Egyptian penchant for embalming all things, great and small. The exhibition’s high-tech wing features a replica of King Tut’s mummy and a bronze skull that visitors are encouraged to touch.

The iconic image of Tutankhamun’s golden mask that features the exhibition comes from a small coffin that used to contain the king’s embalmed liver.

Lach explains: “The coffinette was placed with three others and [together] they held four different organs, and then they were placed in a box and then in another box. The coffins were human-size, life-size, and they were sometimes two or three that would interlock one on top of the other.”

The small coffin is nothing short of exquisite, inside and out, with hieroglyphs covering the interior.

Not surprisingly, Egypt’s ancient relics still raise many questions: How did the ancient Egyptian sculptors, living in the Bronze Age, manage to carve and buff great big blocks of granite when, today, carvers need to use tungsten-tipped chisels and industrial diamonds?

In an article titled Advanced Machining in Ancient Egypt, available on his website, Christopher Dunn, who confesses to be a “technologist” rather than an Egyptologist, concludes that the artifacts left behind by ancient Egyptians are unexplainable in simple terms.

“Artifacts were produced in prolific number with no tools surviving to explain their creation. …” “We have only a sketchy understanding of the full scope” of this civilization’s technology, Dunn writes.

Perhaps this is why the culture of ancient Egypt is so awe-inspiring. The Tutankhamun exhibition actually gave rise to the term “blockbuster” when it was shown in London for the first time and the queue for tickets was going around the block.

There’s an ancient Egyptian belief that to speak of the dead is to make them live again. Considering the number of visitors set to see the exhibition, the Boy King and his entourage may be smiling somewhere out there in the afterlife.