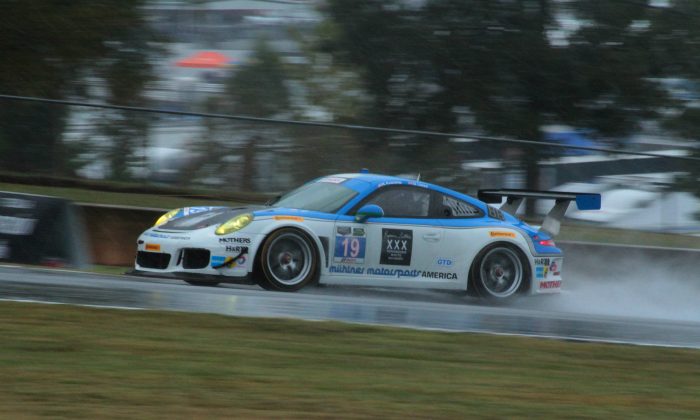 BRASELTON, Ga.—The heavy weather predicted all week to it the Atlanta area Friday came right on schedule. Clouds rolled in overnight, and the rwwin started falling as the sun started rising.

At first the precipitation was light—mostly—which allowed the Cooper Tires Prototypes Lites series to run its first race if the weekend. That race was rained out halfway through, and only two Tudor United Sportscar Championship cars—the #19 Muehlner Porsche and the #73 Park Place Porsche—even tried to take laps.

The rain eased ninety minutes after the Tudor session ended, allowing the scheduled Porsche GT3 Cup race to take the green flag on time—and immediately devolve into a multi-car collision.

As of 11:30 a.m. track officials were trying to clear the damaged cars and restart the race. By 11:40 the rain had slackened and the race restarted.

The skies over Braselton are clearing at publishing time; the rest of the day’s activities should go off as planned including the Continental Tire Sports Car Challenge race at 1:15 p.m. and Tudor Championship qualifying at 4:20 p.m.