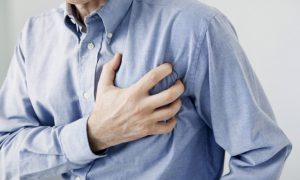 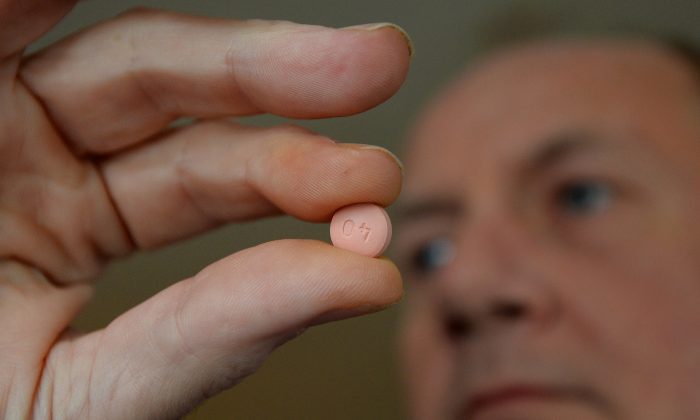 Alwyn Daniel with a tablet of the anti-cholesterol drug statins in London on March 21, 2014. (Ben Stansall/AFP/Getty Images)
Opinion

Modern medical practice is engaged in a battle, not for hearts and minds, but for the conversion of perfectly healthy people into patients.

However, a substantial majority of these people, labelled “at high risk” of various diseases in the name of prevention, will not benefit despite the significant costs of preventive interventions. In fact, some may be harmed.

This “medicalization” of healthy persons, especially after midlife, arises largely from ever-lower cutoffs for treatment of risk factors for cardiovascular diseases (CVD)—heart attacks and strokes. Modest elevations of blood pressure and blood cholesterol, for example, typically cause no symptoms until they have been present for decades. Overtreatment of these risk factors can do more harm than good.

For example, controversy on both sides of the Atlantic surrounds new thresholds for cholesterol treatment, which recommend the statin family of drugs be taken indefinitely and daily for one-quarter to one-third of the healthy older-adult population.

Of specific concern is that millions of additional persons with no symptoms will now be prescribed statins, even though, for many, their absolute risk of cardiovascular disease is quite low, and their first heart attack or stroke is many years to decades away.

The new guidelines are not simple to communicate to patients. But here’s the bottom line: in the U.K., there is now a significantly lowered risk-threshold for starting statins—from 20 percent to 10 percent—the likelihood that a given healthy patient will have a heart attack or stroke in the next 10 years—and in the United States that cutoff is even lower at 7.5 percent.

Statins do have impressive benefits compared to risks for people who have significantly higher CVD risk levels, and in persons who have had symptoms of heart attack or stroke. But this is not the case for everyone.

What is driving these guideline changes?

The continuing fall in the price of powerful generic statins has converted statins prescribed for these lower risk thresholds into a competitive health economic investment. In other words, the new guidelines meet NICE (National Institute of Health and Care Excellence) criteria in the U.K. for “quality-adjusted years of life gained, per pound sterling spent.”

The societal cost implications of the new guidelines are, however, breathtaking: 285 million pounds cost annually to the NHS; much more in the United States.

Guideline advocates claim the guidelines will reduce the rate of heart attacks and strokes in those treated by a third or more. Critics, however, point out that many patients, citing side effects such as muscle discomfort, simply won’t continue taking statins long term. Also, next to nothing is known about the long-term safety of the newer, high-potency statins. Large groups of patients on statins have only been followed-up for 10 to 15 years, and many of them were on older, less potent statins.

More worrisome, even this limited follow-up has recently found one new case of Type 2 diabetes per 700 person-years of statin treatment. But if it has taken epidemiologists more than two decades to discover the statin/Type 2 diabetes link, what other subtle and delayed side effects of statin use are we not yet aware of?

Discovery of just one additional side effect of similar seriousness and frequency would virtually wipe out the net benefits at the new thresholds for statins.

Some physicians and researchers are asking: “Is this really how we want to spend our scarce health care resources?” In terms of preventing cardiovascular disease specifically, why not work harder on promoting nonsmoking, healthy diet, and physical activity instead? These lifestyle risk- actors are reversible without drugs, and still constitute the fundamental “upstream” causes of heart disease. Lifestyle changes population-wide would also yield spinoff benefits in preventing certain cancers and other chronic diseases not affected by statins.

This is where the controversy currently sits. Many physicians are reluctant to follow the new guidance. In the interim, the increased complexity of such closely balanced risks and benefits will require clinicians to more skillfully engage patients’ personal values and preferences before starting statins.

John Frank is an expert adviser with EvidenceNetwork.ca and director of Public Health Research & Policy at the University of Edinburgh in the U.K. His book “Prevention: A (Very) Critical View” will be published by Oxford University Press in late 2015. This article was previously published TroyMedia.com.