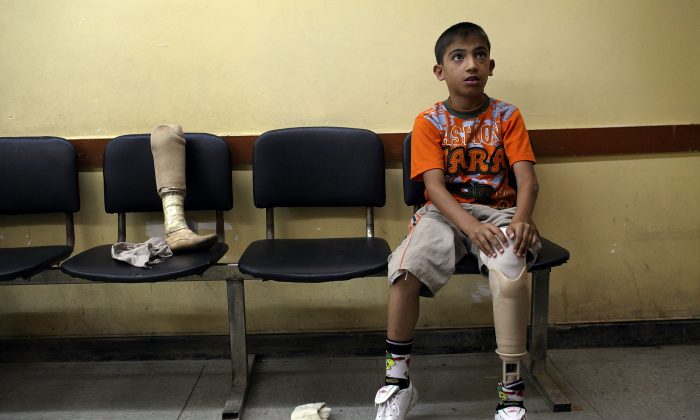 Ten-year-old Ali Mazin in Baghdad, Iraq, on July 11, 2011, tries on a new prosthetic leg after losing his in a car bombing in 2007. Residents of six Sunni-majority provinces in Iraq have staged peaceful sit-ins since late 2012. They accuse Iraqi Prime Minister Nouri al-Maliki of mass murder, blatant discrimination to favour Shias, and acting more like a criminal gang than a government during eight years in power. (Spencer Platt/Getty Images)
Opinion

The escalating violence across Iraq, including beheadings, is horrific and heartbreaking.

What are some underlying realities?

Iraq and its current borders emerged from the 1919 Paris Peace Conference. As with their carving up of the African continent a generation earlier, unwitting colonial powers ignored cultural and sectarian differences, most notably in the Middle East the centuries-old Sunni-Shia conflict.

The insurgents of the Islamic State in Iraq and Greater Syria (ISIS) are fanatics from the deeply mistreated yet mostly responsible and non-violent regional Sunni minority. Sunnis accuse Iraqi Prime Minister Nouri al-Maliki of mass murder, blatant discrimination to favour Shias, and acting more like a criminal gang than a government during eight years in power. No matter how maliciously Maliki governed, he maintained the support of U.S. President Barack Obama.

In recent days, ISIS has used similarly barbaric tactics to rout Maliki’s forces. However, the bulk of the resistance is coming from tribal leaders and moderate Sunnis and Shias who can no longer tolerate the Maliki regime, dominated by Iran’s mullahs.

Maliki and Iran’s paramilitary Qods Force operating in Iraq are the causes of much violence across Iraq. With the final withdrawal of U.S. forces in 2011, Tehran filled the vacuum. The press conference group described the support of Western governments for Maliki as “shameful,” saying they share responsibility for various massacres, and called for an end to U.S. and Russian arms being supplied to Maliki.

Iraqi events affect the entire region: If Iraq’s government was not dominated by Iran, Assad in Syria would be ousted by now. The survival of the Tehran regime also depends on Assad and Maliki support, so Tehran’s terrorists are now killing non-Shias in both their countries.

Representatives of a range of Iraqi political parties say that the recent elections were neither free nor fair. Maliki, using intimidation, threats and bribes, is desperately still seeking to become prime minister for a third term.

Residents of six Sunni-majority provinces in Iraq have staged peaceful sit-ins since late 2012, protesting widespread repression and executions. They were attacked by the Iraqi military. These attacks constitute war crimes; the international community should condemn them.

Western governments and others who helped topple Saddam Hussein and then empowered Maliki bear much responsibility for the current situation. The Obama administration has remained silent about Maliki’s atrocities against Iraqi citizens, particularly the Sunni population and other minorities.

Finally, the Brussels press conference stressed that Iraq’s crisis can only be resolved by ousting Maliki, combined with the complete eviction of Iran’s operatives from Iraq, and through the creation of a democratic national government representing all segments of Iraqi society.

The Obama wall of silence extends to foreign refugees inside Iraq, including 2800 Iranian dissidents remaining in Camp Liberty, who have each been promised protection by the United States. Earlier, 52 members of this group, then in Camp Ashraf, were photographed by survivors being systematically murdered by Malaki’s elite troops. U.S. State Department officers later told Congress, “There is no evidence the Iraqi government was involved in the Ashraf Massacre.”

Iraq’s third largest community, six million Kurds, has been one of its most responsible. Five months ago, it warned that Iraqi Sunnis were ready to revolt, but were ignored. Their army, the Peshmerga militia, is highly-respected and tough. Their government is considered honest, tolerant and competent. The Kurds themselves are mostly Sunnis, but tend to define themselves more through their ethnicity and language than by religion.

An estimated 400,000 Christians remain in Iraq following the waves of persecution directed at them since 2003. About a million have fled, some taking refuge in the Iraqi Kurdish city of Erbil, where they are being protected by the Kurdish militia. The targeted religious cleansing of Christians, Nina Shea of Freedom House properly stresses, is a crime against humanity, which “never received much attention by either President Bush or President Obama’s administrations.”

Now is the time for persons of good will everywhere to speak up for the many peaceful Iraqi citizens: Shiites, Sunnis, Kurds, Christians, Jews, Arabs, and others. All deserve to be part of a new government in Iraq.

If the U.S. administration is seen to join with Maliki and Iran to attack these aggrieved Iraqis, it would reverberate throughout the Middle East and further destabilize the region.

Unless sectarian differences can be overcome peacefully, there is little hope for stability in Iraq. The first step forward is Maliki’s departure.

This article was previously published on Yahoo! Canada.