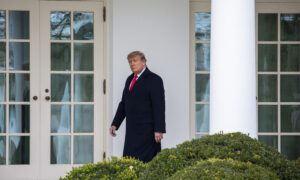 Constitutional scholar Jonathan Turley said that the swift impeachment of President Donald Trump over his speech to protesters—some of whom later entered the U.S. Capitol building in the midst of chaos—would be unwise and damage precedent.

“With seeking his removal for incitement, Democrats would gut not only the impeachment standard but also free speech, all in a mad rush to remove Trump just days before his term ends,” Turley, who himself was an impeachment inquiry witness months ago, wrote on The Hill.

Before the Capitol incident, Trump delivered a speech to his supporters alleging election fraud and noted the irregularities during the Nov. 3 contest.

Trump said the protest during the Jan. 6 Joint Session of Congress shows “the kind of pride and boldness that they need to take back our country.” And he added to the crowd, “Let us walk down Pennsylvania Avenue.” The president did not tell the protesters to breach the Capitol or commit acts of violence, later condemning them.

At one point, Trump told his supporters to “peacefully and patriotically make your voices be heard.”

Turley said that he opposed Trump’s electoral vote challenge and said some of his remarks were “reckless and wrong” on Jan. 6.

“This address does not meet the definition for incitement under the criminal code. It would be viewed as protected speech by the Supreme Court,” Turley wrote in the opinion article.

“When I testified in the impeachment hearings of Trump and Bill Clinton, I noted that an article of impeachment does not have to be based on any clear crime but that Congress has looked to the criminal code to weigh impeachment offenses,” he said. “For this controversy now, any such comparison would dispel claims of criminal incitement. Despite broad and justified condemnation of his words, Trump never actually called for violence or riots. But he urged his supporters to march on the Capitol to raise their opposition to the certification of electoral votes and to back the recent challenges made by a few members of Congress.”

The law professor further argued that, similar to many violent protests over the past several years, “criminal conduct was carried out by a smaller group of instigators” and that “Capitol Police knew of the march but declined an offer from the National Guard since they did not view violence as likely.”

Going further, Turley said that with the impeachment push, House Democrats are moving to set a “more extreme” precedent.

“Under their theory, any president could be removed for rhetoric that is seen to have the ‘natural tendency’ to encourage others to act in a riotous fashion. Even a call for supporters to protest peacefully could not be a defense,” he said. “Such a standard would allow for a type of vicarious impeachment that attributes conduct of third parties to any president for the purposes of removal.”