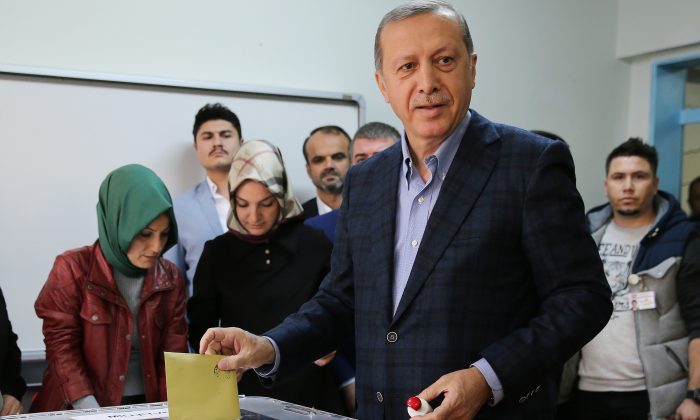 Turks Vote as Ruling Party Seeks to Claw Back a Majority

ANKARA, Turkey—As Turkey faces its worst violence in years, tens of millions of voters cast ballots Sunday in a contest that will determine whether the ruling party can restore the parliamentary majority it had enjoyed for over a decade.

The vote is a rerun of a June election in which the ruling Justice and Development Party, or AKP, surprisingly lost its one-party rule due to a strong showing by a Kurdish party. The key question Sunday is whether the ruling party gets enough seats for an outright majority in parliament or whether it will have to form a coalition in order to govern.

Turkey is a key U.S. ally in the fight against Islamic State and, since it hosts more Syrian refugees than any other nation in the world, a crucial player in efforts to end the war in Syria and resolve Europe’s massive immigration crisis.

Turkish Prime Minister Ahmet Davutoglu is calling on voters to choose stability and give AKP a new majority. Opposition parties hope to force Davutoglu into forming a coalition.

More than 54 million people are eligible to vote at more than 175,000 polling stations and turnout is expected to be high.

President Recep Tayyip Erdogan is not on the ballot, but voters will determine whether he can continue to be Turkey’s primary political power by guiding the ruling party in parliament.

Erdogan has been warning of instability if a coalition government is formed but also says he will adhere to voters’ wishes.

“We will all have to show respect to the national will,” he said after voting in Istanbul. “Turkey has made great strides in democracy and this stride will be strengthened with today’s election.”

Erdogan called for a new election after Davutoglu failed to form a coalition with any of the three opposition parties in parliament after the June vote. Some believe, however, that Erdogan never wanted a coalition government anyway and goaded Davutoglu into trying to win back a majority in a new election.

In June, Turkey’s pro-Kurdish People’s Democratic Party, or HDP, for the first time cleared a 10 percent threshold needed for representation as a party in parliament, taking seats mostly at the ruling party’s expense. But tensions with Turkey’s large Kurdish minority have escalated as the deaths of Kurdish rebels fighting the government have mounted.

“Unfortunately, it was a difficult and troubled period of election campaigning. Lives were lost,” said Selahattin Demirtas, the leader of the HDP, after he voted Sunday. “My wish is that a great hope for peace and calm emerges (from the vote).”

The HDP favors the resumption of peace efforts to end the Kurdish conflict. Erdogan has lashed out at the party, calling it the political arm of the Kurdistan Workers Party, which Turkey and most Western countries consider a terrorist organization.