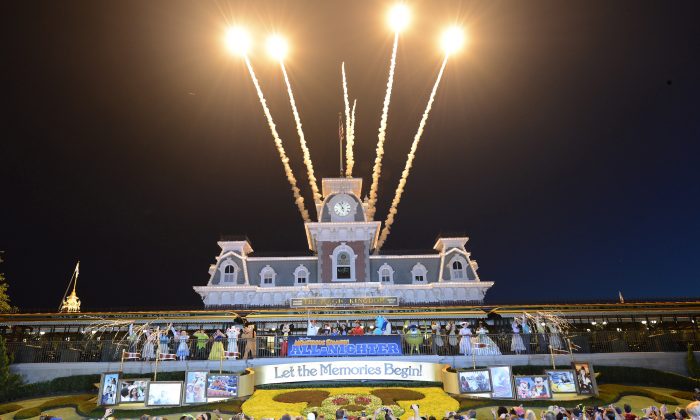 A handout image provided by Disney Parks shows thousands of guests standing outside the Magic Kingdom park as fireworks signal the 6 a.m. opening for the theme park on May 24, 2013, in Lake Buena Vista, Florida. (Todd Anderson/Disney Parks via Getty Images)
Crime and Incidents

ORLANDO, Fla.—A Turkish tourist on his honeymoon was killed early Thursday during an armed robbery in front of his wife in the heart of Orlando’s tourist district.

Osman Darcan, 52, died from multiple gunshots fired by a robber who was trying to steal his wife’s purse by their car outside the hotel resort where they were staying, said Orange County Sheriff’s Office Capt. Angelo Nieves at a news conference.

Darcan was trying to help his wife in a struggle with the robber, who fled without the purse into a waiting car.

It was the first killing of a tourist in Orlando’s tourism district in recent memory, Nieves said. The district around International Drive, or “I-Drive” as locals call it, is among the safest areas in Orlando.

Officers responded to Darcan’s shooting with two minutes of getting a 911 call, and patrols will be increased in the district for the near future, Nieves said.

“Patrols have always been stepped up on the I-Drive corridor,” he said. “It’s one of the safest areas, one of the tourism areas, and we constantly patrol.”

The couple was on their honeymoon and had driven up from Miami on Wednesday afternoon.

Nieves said he didn’t know where in Turkey the couple was from, but the wife was in contact with the Turkish consulate. The wife “was in a very fragile, traumatic state,” he said.

Orlando has been the top tourist destination in the United States for the past two years, with 66 million visitors last year, and the killing was only the latest troubling headline coming out of tourism-dependent metro area.

This past summer, a former contestant from “The Voice” television show was fatally shot after a concert, 49 patrons of a gay nightclub were massacred in the worst mass shooting in modern U.S. history and a toddler was killed by an alligator at Walt Disney World. Some tourists also have grown nervous about coming to Florida because of reports of the Zika virus in South Florida.

When asked what he would say to tourists concerned about coming to Orlando, Nieves said, “This is a very safe area.”