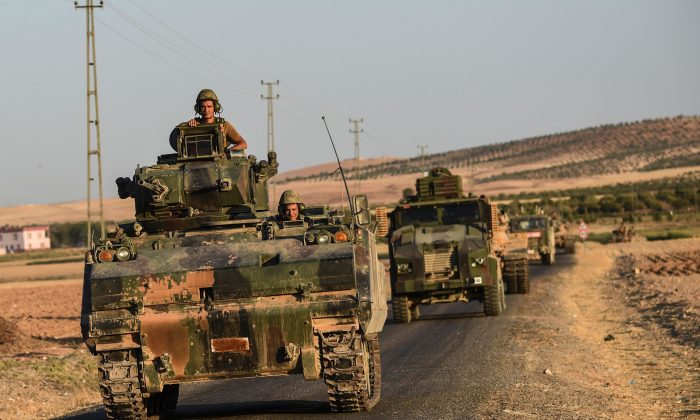 Turkish soldiers stand in a Turkish Army tank driving back to Turkey from the Syrian-Turkish border town of Jarabulus, in the Turkish-Syrian border town of Karkamis, on Sept. 2, 2016. (Bulent Kilic/AFP/Getty Images)
Middle East

ISTANBUL—Turkish tanks crossed into Syria to the west of a frontier town seized from the Islamic State (ISIS) last week, in a “new phase” of an operation aimed at sealing off the last stretch of border controlled by the extremists.

By nightfall, Syrian rebels backed by the Turkish forces seized seven villages from ISIS, according to local journalist Ahmad al-Khatib.

The private Dogan news agency reported at least 20 tanks and five armored personnel carriers crossed at the Turkish border town of Elbeyli, across from the Syrian rebel-held town of al-Rai. The new incursion is unfolding about 55 kilometers (34 miles) west of Jarablus, where Turkish forces first crossed into Syria 10 days ago.

A spokesman for one of Turkish-backed Syrian factions said 100 Turkish troops accompanied 30 tanks across the border, linking up with the rebels at al-Rai. He spoke on the condition of anonymity because he was not authorized to talk about the Turkish troops.

Rebels and Turkish forces are now advancing in two directions, to the east from al-Rai and to the west from Jarablus, to seal the border. The rebels advancing from Jarablus say they captured three more villages from the extremists on Saturday.

ISIS, which once controlled hundreds of miles of territory along the Turkish border and used it to bring in foreign fighters and supplies, now only rules a 21-kilometer (13-mile) stretch of the frontier. The group has suffered a string of defeats in recent months in both Syria and Iraq.

Some 5,000 U.S. and Turkish-backed Syrian rebels have crossed into northern Syria from Turkey to participate in the so-called Euphrates Shield operation, according to local journalist Adnan al-Hussein, who is embedded with the groups.

Three rockets fired from ISIS-held territory in Syria meanwhile struck the Turkish border town of Kilis, some 30 kilometers (19 miles) from Elbeyli, according to the Turkish governor’s office, which said one person was lightly wounded. Dogan says rockets have killed 21 Kilis residents and wounded scores since January.

The Turkish military responded to the rockets on Saturday with howitzers, striking two weapons depots and bunkers, and “destroying the locations and the Daesh terrorists there,” the state-run Anadolu news agency said, referring to ISIS by an Arabic acronym.

Turkey’s military says its right to self-defense as well as U.N. resolutions to combat ISIS justify its Syria incursions.

Turkey and allied Syrian rebels have also fought U.S.-backed Kurdish forces known as the People’s Protection Units, or YPG, around Jarablus. Turkey views the YPG as an extension of the Kurdistan Workers’ Party, or PKK, which Turkey and its allies consider a terrorist organization.

The U.S. has provided extensive aid and airstrikes to the YPG-led Syria Democratic Forces, which have proven to be highly effective against ISIS. The Syria Democratic Forces, which also includes Arab fighters, has taking a large swath of territory from the extremists along the border with Turkey and closed in on Raqqa, the de facto capital of the extremist group’s self-styled caliphate.