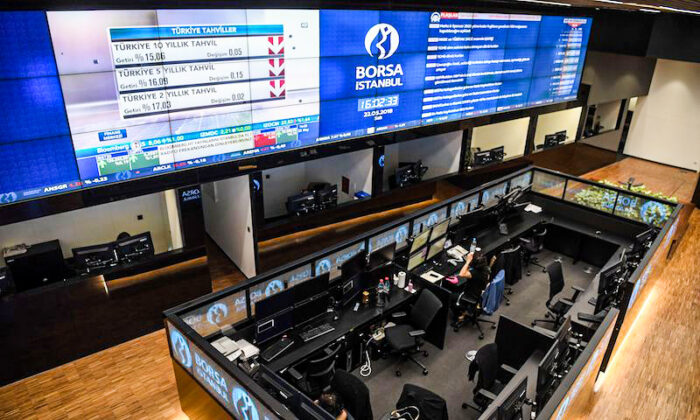 Traders work at their desks on the floor of the Borsa Istanbul on May 22, 2018. (OZAN KOSE/AFP/Getty Images)
Markets

The Istanbul Borsa halted trading as the lira plummeted to a new low, after years of Turkish policies promoting low interest rates
By Nicholas Dolinger

The Turkish stock market was closed twice on Friday after a devastating crash, as the country faces snowballing inflation and a floundering economy.

The Istanbul Stock Exchange (Borsa) halted trading of equities, equity derivatives, and debt repo transactions on Friday at two separate times as the country’s economic crisis reached a new level of alarm. The first instance occurred on Friday afternoon, after the exchange found itself down by as much as 7 percent. At 5:24 p.m. local time, trading resumed but was halted again when the Borsa Istanbul 100 index fell by 9.1 percent after just two minutes of operation.

The immediate catalyst for the crash was an intervention by Turkey’s central bank, which has failed to mitigate inflationary pressures on the lira. The intervention follows from yet another rate cut ordered by Turkish President Recep Tayyip Erdoğan, who has insisted on low interest rates despite years of accelerating inflation.

The lira has declined over 50 percent relative to the U.S. dollar in 2021, with the majority of this depreciation occurring in the past month alone. Experts have for years been warning of an impending economic crisis, but Erdoğan has been persistent in his approach to growth, characterized by ideas about economics that have been described as “unorthodox.” In 2018, the Turkish president waxed poetic about the central bank, claiming that “interest rates are the mother and father of all evil.”

There is much uncertainty facing the Borsa in anticipation of its reopening on Monday, after what will surely be a tense weekend for investors. However, with the combined pressures of inflationary momentum and economic stagnation, Turkish leaders will find themselves facing a challenge of unprecedented magnitude in the country’s recent economic history—the culmination of years of debt and inflation, now having escalated to an alarming degree.