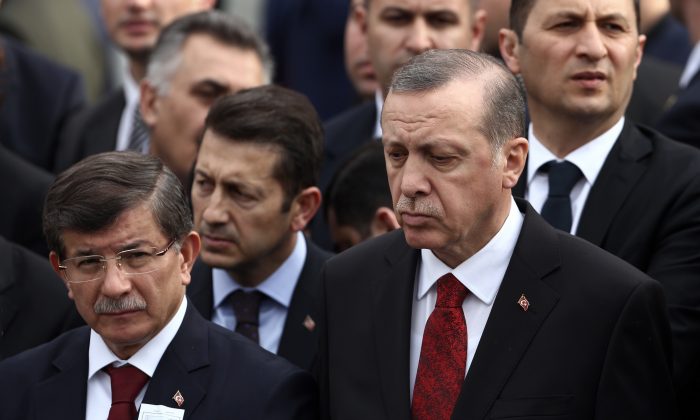 Turkey's President Recep Tayyip Erdogan, right, and Prime Minister Ahmet Davutoglu, left, arrive to attend funeral prayers for army officer Seckin Cil, who was killed in Sur, Diyarbakir Wednesday, in Ankara, Turkey, Thursday, Feb. 18, 2016. Six soldiers were killed after PKK rebels detonated a bomb on the road linking the cities of Diyarbakir and Bingol in southeastern Turkey as their vehicle was passing by, according to Turkeys state-run Anadolu Agency. The deaths come a day after a suicide bombing claimed the lives of at least 28 people and wounded dozens of others.(AP Photo/Burhan Ozbilici)
Middle East

On May 5, the Prime Minister of Turkey, Ahmet Davutoglu, announced his resignation.

Shortly before the announcement, Davutoglu met with Turkey’s President Recep Tayyip Erdogan, of whom he is a close ally. Davutoglu has been considered by many to be subservient to the President, but it seems the two have irreconcilable differences.

Rift in AKP party might well lead to much wider and much more dangerous conflict in Turkey’s society as a whole. https://t.co/Et6F5DRaZR

Speaking in Ankara, Davutoglu announced a May 22 meeting of the Justice and Development Party (AKP) leaders. During the press conference, Davutoglu stated that he will not stand for election as the party leader, ending his 20-month term as Prime Minister that began in 2014.

“I was in front of you, now I will be among you,” Davutoglu told party officials in televised remarks. Davutoglu added that he originally intended to complete his four-year term. “It wasn’t my preference to shorten this, unfortunately it had to be shorter than four years.”

Of his relationship with Erdogan, the Prime Minister said they have “a brotherly relationship,” adding, “You will never hear me say negative things about the president.”

This abrupt resignation also comes as Erdogan seeks to amend the Turkish constitution in an effort to consolidate executive presidential power.

According to the Constitution, the prime minister is charged with the responsibility of leading the government and is the most powerful official. Traditionally, a Turkish president is for the most part a figurehead, with little genuine authority.

Yet Erdogan is largely considered the country’s dominating politician; his unorthodox approach to the presidency has many concerned over Turkey’s recent authoritarian tilt.

Video: Brawl Breaks Out in Turkish Parliament During Meeting on Constitutional Changes

Turkey is currently facing a number of difficult challenges. With attacks from ISIS, conflicts with Kurdish separatists, and an influx millions of Syrian’s refugees, a power struggle within the governing Islamist AKP may have destabilizing effects, both within and without Turkey and the Middle East.

The credibility of Turkey’s EU road rests today with PM @A_Davutoglu_eng. If he leaves, bets are off. https://t.co/8koK5S3dXP