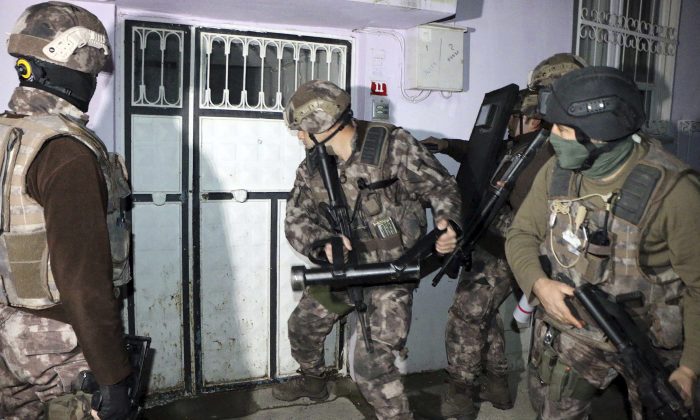 Turkish anti-terrorism police break a door during an operation to arrest people over alleged links to ISIS, in Adiyaman, southeastern Turkey on Feb. 5, 2017. (Mahir Alan/Dha-Depo Photos via AP)
International

ISTANBUL—Turkey’s anti-terrorism police have detained over 440 people for alleged links to the ISIS terrorist group, the state-run agency reported Sunday.

The Anadolu Agency said 60 ISIS suspects, the vast majority of them foreigners, were taken into custody early Sunday in the capital, Ankara.

It said a total of 445 people were detained in simultaneous pre-dawn police operations that spanned several cities, including Istanbul and Gaziantep, near the border with Syria.

The largest operation was in the southeast province of Sanliurfa, where police took into custody more than 100 suspects from multiple addresses and found materials relating to ISIS militants.

Security forces also apprehended nine suspects who were allegedly preparing an attack in the northwestern city of Izmir.

Anadolu did not give the nationalities of all those detained but there were 10 minors among the foreigners detained in Istanbul and the northwestern province of Kocaeli.

Turkey, which last year endured a failed coup attempt and dozens of bloody attacks linked to ISIS or Kurdish militants, has been stepping up its anti-terrorism efforts.

ISIS claimed responsibility for a New Year Eve mass shooting at an Istanbul nightclub that killed 39 people. It claims to have multiple cells in Turkey.

Turkey is a member of the NATO alliance and the U.S-led coalition against IS. It shares borders with Syria and Iraq, two war-torn nations at the heart of the fight against ISIS militants.

Turkish forces have been deployed in Syria since August with the aim of clearing a border patch of ISIS militants and Syrian Kurdish fighters that Ankara considers related to its own Kurdish insurgency.

Some of those taken into custody Sunday reportedly were active in conflict zones and engaged in recruitment efforts for ISIS, relaying its propaganda over social media.