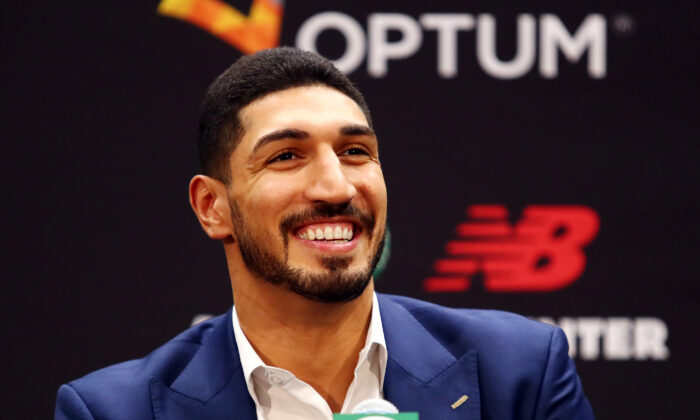 Enes Kanter reacts during a press conference as he is introduced as a member of the Boston Celtics at the Auerbach Center at New Balance World Headquarters in Boston, Massachusetts on July 17, 2019. (Tim Bradbury/Getty Images)
By Zachary Stieber

Turkish NBA player Enes Kanter, an outspoken critic of the government in Turkey, appeared to react to LeBron James after one of the biggest names in basketball declined to speak out in support of Hong Kong protesters.

James spoke on Oct. 14 for the first time about the situation that has engulfed the NBA following an executive’s tweet in support of freedom for Hong Kong.

James called Daryl Morey, the executive, “misinformed,” adding: “So many people could have been harmed, not only physically or financially, but emotionally and spiritually. Just be careful what we tweet, what we say and what we do.”

Kanter, who has been banned from traveling to Turkey by the administration of President Recep Tayyip Erdogan, reacted swiftly after James spoke.

“Wow dude!” he wrote in one missive. “SMH,” he added in another, using the slang for “shaking my head.”

In another tweet, he listed the things that have happened to him for speaking out against Erdogan and the Turkish government.

Among the other consequences, according to Kanter: his siblings haven’t been able to find jobs, his own passport was revoked, and he receives death threats on a daily basis.

-Haven’t seen or talked to my family 5 years
-Jailed my dad
-My siblings can’t find jobs
-Revoked my passport
-International arrest warrant
-My family can’t leave the country
-Got Death Threats everyday
-Got attacked, harassed
-Tried to kidnap me in Indonesia

FREEDOM IS NOT FREE

He was also the victim of an attempted kidnapping while in Indonesia, he added.

“FREEDOM IS NOT FREE,” he concluded.

James later took to Twitter to post his own thoughts, writing: “Let me clear up the confusion. I do not believe there was any consideration for the consequences and ramifications of the tweet. I’m not discussing the substance. Others can talk about that.”

“My team and this league just went through a difficult week. I think people need to understand what a tweet or statement can do to others. And I believe nobody stopped and considered what would happen. Could have waited a week to send it,” he added.

James wasn’t the only player to address the Hong Kong situation by declining to speak out in favor of the protesters. James Harden, the Rockets star player, apologized to China for Morey’s tweet while in the country for a game.

“We apologize,” he told reporters, according to AFP. “We love China.”