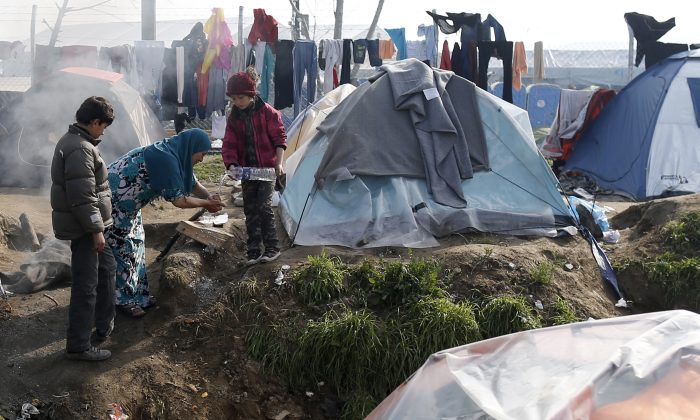 A migrant washes her hands at a makeshift refugee camp at the northern Greek border point of Idomeni, Greece, Monday, March 21, 2016. Hundreds of mostly Syrian asylum-seekers continued to arrive in Greece by sea Sunday despite the start of an international agreement to send migrants back to Turkey. (AP Photo/Darko Vojinovic)
Europe

ATHENS, Greece—Monitors from Turkey have arrived on the Greek islands of Lesbos and Chios to help supervise an agreement aimed limiting the number of refugees flowing into the European Union via smugglers’ boats.

The officers arrived Monday and were to stay for at least one week, as Greek authorities scrambled to implement the landmark deal reached last week between the EU and Turkey that includes faster refugee relocations to European countries as well as collective deportations of migrants from Greek islands back to Turkey.

Greece’s conservative opposition criticized the Turkish arrivals, a controversial topic as Greece and Turkey have ongoing boundary disputes in the Aegean Sea.

Government figures released Monday said the number of stranded refugees in Greece exceeded 50,000 with no significant letdown in the number of daily arrivals.

Four migrants died Sunday while trying to reach Greece, two men off the island of Lesbos and two girls off the tiny islet of Ro, the coast guard said, as smugglers appeared to be opting for more overnight trips and increasingly dangerous routes.

Panos Skourletis, Greece’s environment minister, said smugglers needed to be stopped for the deal to work.

“On paper, the agreement is balanced and the best result we could get,” he told private Mega television. “But no one can guarantee that it will work in practice. That will become clear over the next few days.”

Under the deal, migrants arriving on Greek islands from Sunday onward will not be allowed to travel to the Greek mainland. But authorities here are still working out how newly-arrived refugees and migrants will be sent back to Turkey.

On the Greek mainland, army personnel continued expanding refugee shelters at sites in central and northern Greece — mostly at former army bases — so migrants who traveled to the Greek islands before the agreement came into effect could be resettled.

Ferries transporting them from the islands were using the port of Elefsina, west of Athens, instead of the main commercial port of Piraeus, to allow authorities to cope with the increased numbers