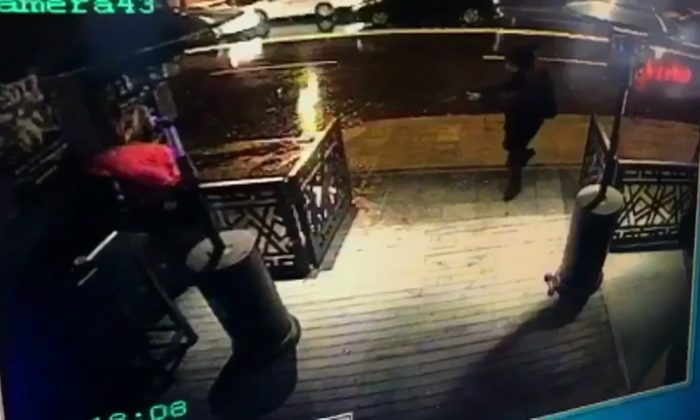 This image taken from CCTV provided by Haberturk Newspaper on Jan. 1, 2017 shows the attacker, armed with a long-barrelled weapon, shooting his way into the Reina nightclub in Istanbul, Turkey on Sunday morning. (CCTV/Haberturk Newspaper via AP)
International

Turkey’s state-run news agency says a criminal complaint has been filed against people who used social media to praise the deadly New Year’s attack at a nightclub in Istanbul, as well as against several people who demonized the New Year celebration or threatened attacks.

The Turkish Bar Association filed a criminal complaint with the Ankara Chief Public Prosecutor’s office on Monday, calling for the investigation and prosecution of those who praised the gun attack which killed 39 and injured dozens.

Some social media users praised the killings and condemned the night’s celebration on religious grounds.

The complaint also called for prosecution of a school administrator who banned New Year’s celebrations, those responsible for protests or banners depicting violence against Santa Claus, as well as a newspaper which published threatening headlines.

Prime Minister Binali Yilidirim sent a Twitter message on Sunday warning that legal action would be taken against those who praised terrorism.