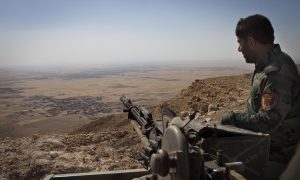 ANKARA, Turkey — President Barack Obama’s stepped-up partnership with Turkey in fighting the Islamic State may come at the cost of alienating another key group he’s counting on for help in the same conflict: the Kurds.

To Obama’s relief, Turkey has finally started bombing Islamic State targets in neighboring Syria, and agreed to let the U.S. military launch airstrikes from key air bases inside Turkey in a deal announced last week. But in an unexpected twist, Turkey simultaneously started shelling Kurdish rebels in Iraq, where Kurds have proven unusually capable of wresting back territory from the Islamic State militants with the help of air support from the U.S.-led coalition.

The White House has publicly sided with Turkey, endorsing the NATO ally’s right to defend itself against recent deadly attacks in Turkey by the Kurdistan Workers’ Party, or PKK. But Iraq’s prime minister says the Turkish strikes violate Iraq’s sovereignty, and U.S. officials have quietly signaled they’re urging Turkey to lay off.

It’s a dizzying array of alliances that illustrates Obama’s paucity of good options for partners in his campaign against the Islamic State, an extremist Sunni militant group known in Arabic as Daesh. The U.S. considers the PKK, which has waged a long insurgency in Turkey, to be a terrorist group, but is supporting and equipping other Kurdish forces in Iraq and Syria that share the PKK’s goal of defeating the Islamic State.

“Knowingly or not, the U.S. is going to end up having to choose between the Turks and the Kurds,” said Blaise Misztal, national security director at the Washington-based Bipartisan Policy Center.

While defending Turkey publicly, the U.S. has been urging Turkey to be “judicious” in its retaliation against the PKK, senior U.S. officials said. But Turkey’s air campaign shows few signs of letting up.

Turkish jets hit Kurdish rebel targets in northern Iraq overnight and the government said strikes would continue until the rebels lay down their arms. White House spokesman Eric Schultz called Wednesday for “a return to the peaceful solution process,” but Turkey’s prime minister shot down that prospect until the PKK withdraws its armed fighters from Turkey.

Despite the strikes against the PKK, the U.S. is pledging to work with Turkey to create a 68-mile “Islamic State-free zone” along its border with Syria.

But the White House has rejected claims that Obama agreed to look the other way to secure Turkey’s help against IS. Although Turkey began shelling Islamic State and Kurdish targets on the same day, the administration insists there’s no connection.

“I understand the coincidence of all of this, but it is just that,” said State Department spokesman John Kirby.

Likewise, senior U.S. officials said Turkey agreed two weeks ago to let the U.S. launch airstrikes from Incirlik and elsewhere in Turkey. That was before the PKK killed two policemen in Turkey and took credit for it, which the officials said was the reason Turkey struck the Kurds.

But Turkey isn’t drawing any such distinction.

“There is no difference between PKK and Daesh,” said Turkish Foreign Minister Mevlut Cavusoglu. And Turkey specifically referenced its strikes against Kurdish rebels when it called an urgent NATO session this week under the alliance’s Article 4, which applies when a member state feels its security or sovereignty are threatened.

Obama’s strategy against the Islamic State depends on local forces in Iraq and Syria fighting the militants on the ground while the U.S-led coalition provides cover from the air. Despite U.S. training, Iraq’s military has been slow to take the advantage. The Kurds, an ethnic group with their own language with populations in Syria and Iraq, have helped loosen the Islamic State’s hold on key sections of both countries.

Until he shifted course last week, Turkish President Recep Tayyip Erdogan had been primarily focused on opposing Syrian President Bashar Assad in the brutal Syrian civil war — putting him at odds with Obama, who has said fighting Islamic State is the priority. But recent attacks blamed on Islamic State inside Turkey drew alarm from Turkey’s government, leading to its decision to step up its role in Obama’s coalition.

“The price Turkey wants for cooperation is a free hand against the Kurds,” said Jon Alterman, a former State Department official who runs the Mideast program at the Center for Strategic and International Studies.

And the U.S. still hasn’t determined which Syrian rebels will do the fighting on the ground to oust Islamic State militants along the Turkish border, said the U.S. officials, who weren’t authorized to comment by name and requested anonymity.

The main Syrian Kurdish militia, known as the YPG, is affiliated with the PKK, and claimed Monday that it had been shelled by Turkish troops. Turkey said it isn’t targeting the YPG, but promised an investigation. The other potent force there that opposes Islamic State in Syria, the Nusra Front, is linked to al-Qaida. And the U.S. acknowledged recently it has only managed to train 60 so-called moderate Syrian rebels to fight IS.