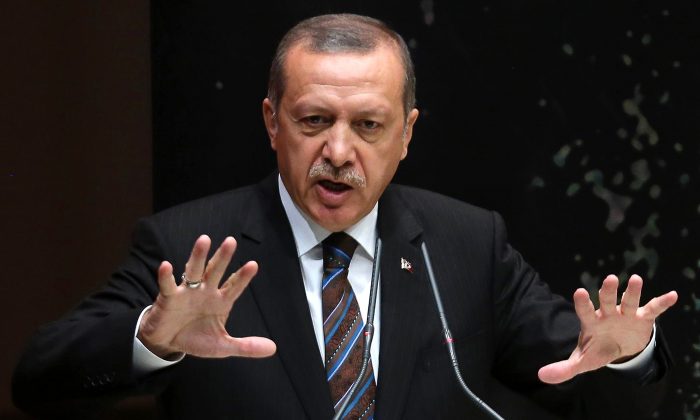 ANKARA, Turkey—Turkey’s long-ruling party has suffered surprisingly strong losses in parliament that will force it to seek a coalition partner for the next government, but other parties on Monday vowed to resist any pact.

President Recep Tayyip Erdogan’s Justice and Development Party, known as the AKP, won less than 41 percent of votes in Sunday’s election for Turkey’s 550-seat parliament. It was projected to take 258 seats, still top of the political heap but 18 below the minimum required to rule alone.

The result dealt a stunning rebuke to Erdogan, who had hoped to reshape Turkey’s democracy into one with a powerful presidency in which he — not parliament — would wield most control of government affairs.

Erdogan’s party colleague, Prime Minister Ahmet Davutoglu, convened his cabinet Monday to chart the most likely course to remain in power, whether by coaxing a reluctant opponent to the table or by trying to rule alone in a parliament where the AKP will be outnumbered by three empowered rivals.

The AKP’s surprise loss of parliamentary control looks likely to undermine Erdogan’s ambitions to make Turkey a dominant regional power. The result also casts doubt over the course of a 2-year old Kurdish peace process championed by Erdogan that seeks to end the decades-old conflict that has cost tens of thousands of lives.

Investors also took fright at the potential loss of stable, one-party government. Turkey’s currency slumped 5 percent to a record low of 2.8 lira to the U.S. dollar, the stock market in Istanbul tumbled 8 percent, and the yields on Turkish government 10-year bonds surged nearly a full point to 10 percent.

Under Turkey’s constitution, once all lawmakers take their oath of office, all parties have 45 days to negotiate on forming a new governing alliance.

But analysts say prospects have been soured by the divisive campaigning tactics of Erdogan, who as ceremonial head of state was legally bound to remain neutral. Instead he led fierce, partisan attacks on rival parties.

Those parties — the center-left Republican People’s Party (CHP), right-wing Nationalist Movement Party (MHP) and the rising pro-Kurdish voice of the People’s Democratic Party (HDP) — all said Monday they would not prop up an AKP-led government. Some said the outcome pointed to new elections.

But the government’s deputy prime minister, Numan Kurtulmus, told reporters Monday he was confident that his party would form a coalition with one of the other three. He called the idea of a new election a “distant possibility,” while the alternative of a three-party government that excluded the AKP was “inconceivable.”

The biggest change from Turkey’s previous parliament is the ascendancy of the People’s Democratic Party, a socially liberal force rooted in the Kurdish nationalism of Turkey’s southeast. It attracted more than 12 percent of votes, breaching the minimum threshold of 10 percent designed to block extreme or regional parties from gaining any foothold in parliament.

Analysts said that breakthrough did most damage to the AKP’s hopes, and the People’s Democracy leader said he had no intention of saving the government’s skin now.

“We have promised our people that we would not form an internal or external coalition with the AKP,” said Selahattin Demirtas, whose party is expected to win 80 seats. “We are clear on that.”

The party that finished second with a projected 132 seats, the Republican People’s Party, called for it to combine with other opposition forces to force the AKP from power. But such an alliance would have to reconcile the anti-Kurdish conservatives of the Nationalists with the growing political voice of Turkey’s Kurdish minority, a daunting task.

On paper, the Nationalists with 16 percent of votes and 80 seats appear closest in ideology and temperament to the AKP. But their leader, Devlet Bahceli, also is arguing that voters want the AKP out of power, even if that means running another election within months.

“Nobody has the right to sentence Turkey to an AKP minority government,” Bahceli said. “Whenever there can be early elections, let them take place.”