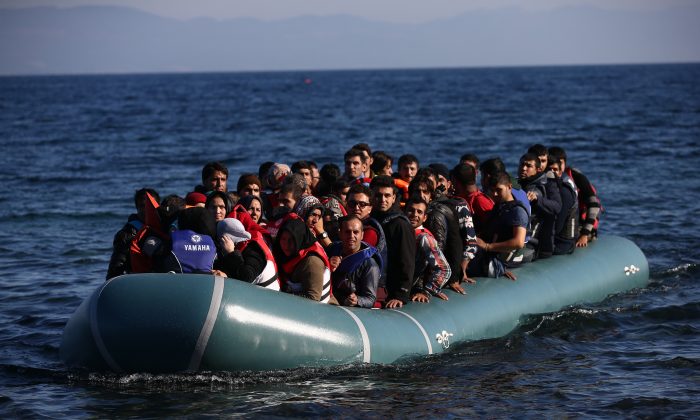 A migrant boat arrives after making the crossing from Turkey to the Greek island of Lesbos, in Sikaminias, Greece, on Nov. 12, 2015. Rafts and boats continue to make the journey from Turkey to Lesbos each day as thousands flee conflict in Iraq, Syria, Afghanistan, and other countries. Over 500,000 migrants have entered Europe so far this year and approximately four-fifths of those have paid to be smuggled by sea to Greece from Turkey, the main transit route into the EU. (Carl Court/Getty Images)
International

For months, Western policymakers have agonized over what to do with the masses of Sunni Muslim migrants flooding Europe by the boatload, particularly Syrians. Largely missing from this discussion is the question of why this flood is happening.

For starters, it doesn’t have much to do directly with the civil war in Syria or the rise of the Islamic State (ISIS). The vast majority of the 886,662 migrants who illegally entered Europe this year embarked from Turkey, a little over half of them Syrians who took shelter in the country over the past four years. “EU officials have said … Ankara was very effective in previous years in preventing the outflow of refugees from the country,” according to the Wall Street Journal.

What caused the spike in migration is that Ankara stopped containing it.

What caused the spike in migration is that Ankara stopped containing it. Over the past year or so, the Turkish government has allowed human traffickers to vastly expand their operations, bringing prices down tenfold (from $10,000-$12,000 per person last year to around $1,250 today, according to one report). This spawned what the New York Times calls a “multimillion-dollar shadow economy” profiting from the traffic, ranging from the smugglers to manufacturers of cheap rafts, life vests, and other equipment.

By the spring of this year it had become easier and cheaper than ever before to illegally enter Europe through Turkey, and more people have taken advantage of the opportunity Ankara has created.

So why did Turkish President Recep Tayyip Erdogan open the spigot? Put simply, to extract financial, political, and strategic concessions from European governments in exchange for closing it.

Ankara certainly hasn’t been shy about asking for money over the course of its negotiations with EU officials in recent weeks. On Nov. 29, the EU agreed to provide Turkey with an “initial” $3.19 billion and take steps to expedite its bid to join the EU in exchange for Turkish promises to better patrol its coastlines.

Erdogan also used the crisis to generate foreign political support ahead of snap elections on Nov. 1, essentially a re-do of the June 2015 elections that saw the ruling AKP lose its parliamentary majority for the first time. Though Western diplomatic protocol frowns on state visits during election time, German Chancellor Angela Merkel visited Istanbul for high-profile meetings with Erdogan and Prime Minister Ahmet Davutoglu just two weeks before the vote. The European Commission postponed the release of a report detailing the erosion of the rule of law, freedom of expression, and judicial independence in Turkey until after the election in order, according to Reuters, “to avoid antagonizing” its president.

Most worrisome, perhaps, is Turkey’s pursuit of strategic payoffs for its human wave assault on Europe. In a letter sent to European leaders at the Sept. 23 EU migration summit, Davutoglu proposed the creation of a “safe zone” and U.S.-enforced no-fly zone stretching from the Turkish border 80 kilometers (50 miles) into northern Syria, where his government has backed a variety of Sunni Islamist insurgents against both pro-regime Syrian forces and local Kurds.

Although the start of Russian military intervention in Syria on Sept. 30 put an end to this fantasy for the time being (which perhaps explains why the Turks were so trigger-happy in shooting down an Su-24 that only slightly violated their airspace on Nov. 24), you can bet Erdogan will use the migrant crisis to pressure the West into supporting his ambitions in Syria.

You can bet Erdogan will use the migrant crisis to pressure the West into supporting his ambitions in Syria.

If all of this sounds familiar, it’s because the late Libyan leader Muammar Gaddafi used to play the same game, turning the pipeline of illegal trans-African migration into Europe on and off as a way of extracting concessions. The most vexing question, then as now, is not what to do with the migrants, but what to do with a government that so callously manipulates masses of downtrodden human beings as a diplomatic pressure tactic.

On this there’s room for debate. But the first step in doing anything about it is to call Erdogan out for what he is—dangerous and manipulative—no partner for Western leaders. Still, after meeting with Erdogan in Paris on Tuesday, President Obama praised Turkey for being “extraordinarily generous when it comes to its support of refugees.”

The next step, instead of bribing Turkey with ransom payments to end the hemorrhaging of Syrian and other Middle East refugees into the West, should turn the tables on Ankara. The potential loss of Western support to Turkey as it deals with both Russia and ISIS should be the sword of Damocles, convincing Erdogan to contain the refugee crisis.

The potential loss of Western support to Turkey as it deals with both Russia and ISIS should be the sword of Damocles, convincing Erdogan to contain the refugee crisis.

Western material support to Turkey should be cut off entirely unless Ankara puts an end to the refugee crisis it is manufacturing and begins to play a constructive role in bringing stability to the region. How appropriate that an ancient Greek tragedy disrupt the current calamitous Turkish-born reality.

Gregg Roman is director and Gary C. Gambill is a research fellow at the Philadelphia-based Middle East Forum. This article was previously published on TheHill.com.