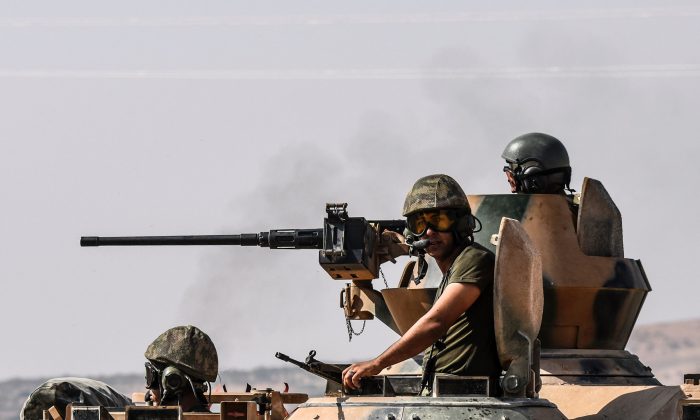 Turkish forces move into Syria as part of operations against Kurdish People's Defense Units and ISIS fighters on Aug. 26, 2016. Experts say that Turkey has walked a delicate balance in being able to carry out the intervention. (Bulent Kilic/AFP/Getty Images)
Middle East

Turkey could not have launched attacks against fellow U.S. allies, the Kurdish People’s Defense Units (YPG), without mending ties with Russia, experts say.

The attacks on the Syrian side of the border must have taken months of extensive preparation and had Russia’s allowance, given the Russian military’s powerful presence on the Syrian battlefield.

Turkey has made it clear that its military operations in Syria, which it launched on Aug. 24, are as much about preventing the YPG from seizing territory as they are about going after the ISIS terrorist group.

The predominant targeting of YPG-controlled areas seems to have caught U.S. officials by surprise and the United States is calling on Turkey to cease those military operations.

But despite that, experts say it is unlikely the United States will seriously challenge its NATO partner, given Turkey’s importance as a strategic and regional ally.

The Turkish intervention could not have happened without a reconciliation between Istanbul and Moscow, with Russia expecting several concessions from Turkey, said Reva Goujon, vice president of global analysis at Stratfor.

“Russia wants Turkey’s cooperation on limiting NATO’s building up in the Black Sea, on energy projects like TurkStream, and also wants to avoid Turkish interference in the Nagorno-Karabakh dispute. Turkey patched things up with Russia so that it could pursue its objectives in Syria,” she said.

Increased cooperation between Turkey and Russia comes after months of hostile relations since last November, when Turkey shot down a Russian warplane over the Turkish–Syrian border.

“It would not be possible to do this if there was no rapprochement with Russia. Turkish jets were not even allowed in Syria after the downing of the Russian jet in 2015,” Seyrek said.

What’s key is that Turkey doesn’t undermine Russia’s intent to keep the Assad regime in power.

Growing concerns over the Kurdish Democratic Union Party (PYD) and continued terrorist attacks from ISIS have created a strategic recalibration for Istanbul in the Syrian conflict.

Turkey would prefer the ouster of Assad but has softened its views and appears more willing to include Assad in a transition process.

“Assad is not Turkey’s priority any longer as a result of direct security threats from ISIS and PYD,” said Seyrek.

The PYD is the political arm and the sister organization of the Kurdistan Workers’ Party (PKK), which has been fighting the Turkish state for self-rule for decades and is considered a terrorist organization by Turkey. The YPG (Kurdish People’s Defense Units) is the PYD’s militant wing.

The United States’ and EU’s support of the PYD in combating ISIS increased the party’s effectiveness and allowed them to gain control of territory considered threatening to Turkey.

“Turkey needs to prevent the consolidation of a Kurdish mini-state in Syria, and so needs to maintain a blocking position that prevents Kurdish YPG forces from linking up with Kurdish forces in Afrin canton,” said Goujon. Afrin is one of the Syrian cantons close to the Turkish border that declared autonomy in 2014.

“By intervening, Turkey prevented this.”

Although the United States considers ISIS to be the primary target of coalition forces intervening in Syria, Turkey considers the PYD to be a more significant threat to the Turkish state.

“ISIS is a purely security threat while the PYD is an existential threat to Turkey, especially considering the PKK terrorism,” said Seyrek.

The United States finds itself balancing various factions in the Syrian civil war.

Its Kurdish allies have been extremely effective in the fight against ISIS. Despite Turkey targeting those allies, the United States is expected to prioritize having strong relations with its key ally.

“At the end of the day, the U.S. will prioritize Turkey’s concerns. … This is why we see the U.S. supporting the Turkish operation while trying to force YPG forces back east of the Euphrates,” Goujon said.

That push back would prevent Kurds from forming a mini-state along the border.

The United States views Turkey as a major strategic asset in the fight against ISIS and military cooperation is necessary to share that burden.

“The U.S. also needs to keep close to Turkey as a strategic counterbalance to Russia,” said Goujon.