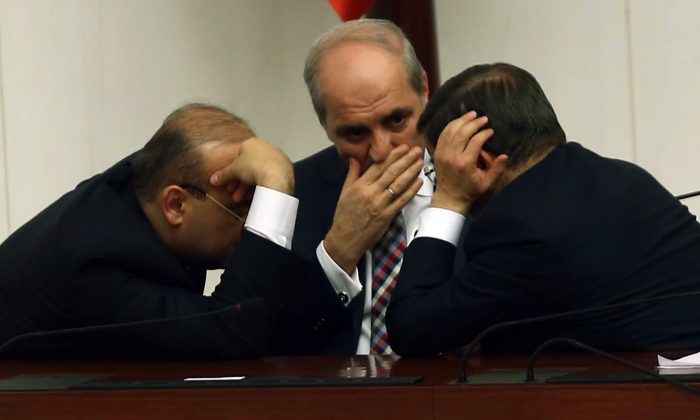 Turkey won’t apologize to Russia for shooting down a warplane operating over Syria, the Turkish prime minister said Monday, Nov. 30, stressing that the military was doing its job defending the country’s airspace.

Ahmet Davutoglu also said Turkey hopes Moscow will reconsider economic sanctions announced against Turkish interests following the incident. The Turkish resort town of Antalya is “like a second home” to many Russian holidaymakers, he said, but refused to yield on Turkish security.

“No Turkish prime minister or president will apologize … because of doing our duty,” Davutoglu told reporters after meeting with NATO Secretary-General Jens Stoltenberg in Brussels.

“Protection of Turkish airspace, Turkish borders is a national duty, and our army did their job to protect this airspace. But if the Russian side wants to talk, and wants to prevent any future unintentional events like this, we are ready to talk.”

Turkish F-16s shot down a Russian warplane on Nov. 24, sparking Cold War-style tensions between Russia and NATO, of which Turkey is a member. One of the Russian pilots was killed, while a second was rescued.

On Monday, the body of Lt. Col. Oleg Peshkov, the Russian pilot, was flown back to Russia following a military ceremony in the Turkish capital, Ankara, Turkey’s military said.

Russian President Vladimir Putin, at the international climate talks in Paris, on Monday said “we have every reason to believe” that the plane was shot down to protect what he described as Turkish profiteering from illegal imports of oil produced by ISIS extremists in Syria.

In Washington, State Department spokeswoman Elizabeth Trudeau said the United States has corroborated that the Russian plane violated Turkish airspace, based on evidence from Turkey and from “our own sources.”

Russia began airstrikes in Syria on Sept. 30 that it says are focused on ISIS fighters. But some observers say Russia is targeting other rebel groups to bolster the forces of Syrian President Bashar Assad. Russia insists that the plane that was shot down didn’t intrude on Turkish airspace.

Douglas Lute, the U.S. ambassador to NATO, said he saw American data that “corroborates Turkey’s version of events. So the airplane was in Turkey, it was engaged in Turkey.”

Putin on Nov. 28 called for sanctions against Turkey, including bans on some Turkish goods and extensions on work contracts for Turks working in Russia. The measures also call for ending chartered flights from Russia to Turkey and for Russian tourism companies to stop selling vacation packages that would include a stay in Turkey.