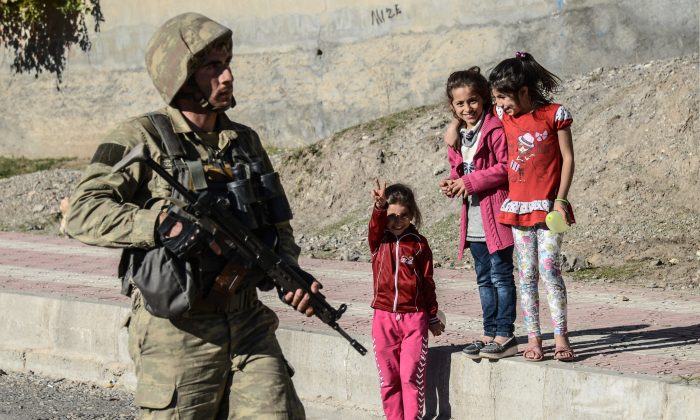 A Kurdish child flashes the victory sign at a Turkish soldier following clashes between Turkish forces and Kurdish militans in Silvan on Nov. 14, 2015. Turkish security forces backed up by tanks and combat helicopters launched a large-scale operation against the militants in the battered town of Silvan, which has been under a punishing curfew for nine days. (Ilyas Akengin/AFP/Getty Images)
Middle East

Turkey Will Withdraw More Troops From Iraq After US Request

ISTANBUL—Turkey says it will withdraw more troops from northern Iraq and acknowledged there had been a miscommunication with the Iraqi government over the issue.

The Turkish Foreign Ministry announced late Saturday the government “in recognition of the Iraqi concerns and in accordance with the requirements of the fight against Daesh (Islamic State, or ISIS), is continuing to move military forces from Nineveh Province.”

The move followed an appeal from President Barak Obama, who called Turkish President Recep Tayyip Erdogan on Friday and urged him “to take additional steps to de-escalate tensions with Iraq.”

The Ankara-Baghdad spat has been an unwelcome setback to U.S. efforts to accelerate the fight against ISIS extremists.

Turkey began withdrawing troops stationed near the ISIS-controlled Iraqi city of Mosul earlier this week. But Baghdad, which considers the deployment of Turkish troops an illegal incursion, demanded the immediate withdrawal of Turkish troops from Iraqi territory at a U.N. Security Council meeting.

The dispute flared up earlier this month after Turkey deployed reinforcements to a camp in Iraq’s Bashiqa region where Sunni and Kurdish troops are being trained to fight ISIS militants. Turkey has stationed troops there since last year but had recently sent more with the stated aim of protecting its forces from ISIS attacks.