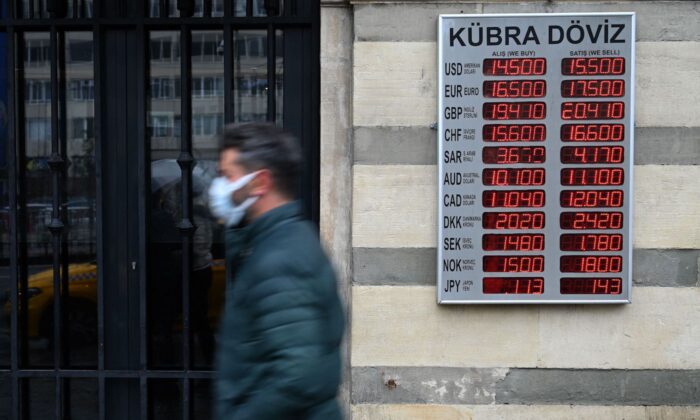 A man walks in front of a screen showing rates against Turkish lira near a currency exchange agency at Kaarakoy in Istanbul on Dec.16, 2021 in Istanbul. (Ozan Kose/AFP via Getty Images)
Economic Policies

The Turkish central bank is plowing ahead with more cuts to the national interest rate, even as the inflation of the Turkish lira continues to accelerate to unforeseen levels.

On Thursday, Turkey shocked markets when it announced a new interest rate cut that would reduce the benchmark to only 13 percent, after seven months in which the benchmark remained flat at 14 percent.

Turkish President Recep Tayyip Erdogan promised last June that he would continue his regimen of rate cuts, even as inflation continues to surpass new records and forces the Turkish economy to make hard adjustments to the new norm. In the past month, companies including Vodafone and Citigroup have shifted to hyperinflation accounting practices in their Turkish operations.

The value of the Turkish lira has fallen by over 50 percent relative to the U.S. dollar in the past year, even as the U.S. experiences a rate of dollar inflation unseen in over four decades. Turkey now ranks as one of the countries with the highest rates of currency inflation, behind only Venezuela, Sudan, and Zimbabwe according to International Monetary Fund data.

Erdogan, however, seemingly ascribes to an alternative theory, which claims that businesses are forced to pass on the costs of paying interest on loans. The Turkish leader has heretofore been persistent in these ideas about economics that have been described as “unorthodox.” In 2018, he even waxed poetic about the central bank, claiming that “interest rates are the mother and father of all evil.”

Erdogan’s stance has been panned.

“As inflation in Turkey soars at 130%/yr by my measure, Pres. Erdogan has CUT INTEREST RATES,” lamented Johns Hopkins economist Steve Hanke. “Is [Erdogan] living in La La Land? The lira is in a death spiral. To crush inflation, [Turkey] must do what I did in Bulgaria in 1997. It must install a currency board, NOW.”

However, the Turkish central bank has remained steadfast in its commitment to this monetary policy and has advanced the idea that inflation may be due to turn a corner in the near future.

Last month, the Turkish central bank projected that inflation would rest at 60.4 percent by the end of the year, before calming down to 19.2 percent at the end of 2023 and 8.8 percent a year later. Yet the Turkish currency has only continued to fall in the past year, and with the government doubling down on interest rate cuts many economists are becoming increasingly concerned that there will be no reversal until there is a drastic change in Ankara.