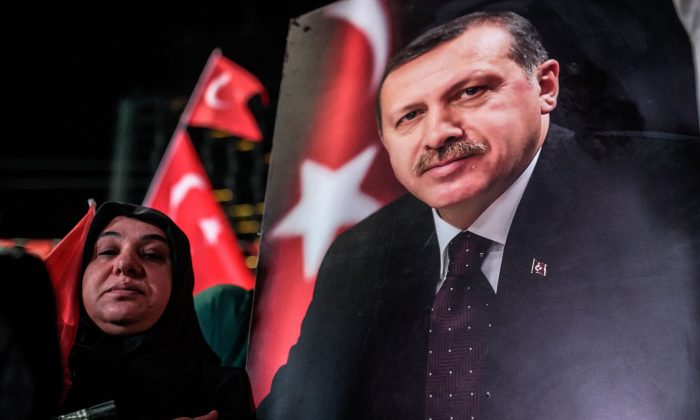 A woman poses next to a poster of Turkey's President Recep Tayyip Erdogan during a pro-Erdogan rally in Taksim Square in Istanbul on July 22, 2016. Turkey detained 283 members of the presidential guard of Recep Tayyip Erdogan after the failed military coup attempt of July 15. The guard are members of the special forces regiment stationed at the presidential palace in Ankara. There are at least 2,500 members, according to local media. (Ozan Kose/AFP/Getty Images)
Middle East

ISTANBUL—In a new tactic against suspected coup plotters, Turkey on Saturday announced it had seized more than 2,250 social, educational or health care institutions and facilities that it claims pose a threat to national security.

The health ministry said patients at hospitals that are being seized will be transferred to state hospitals, highlighting the sweeping impact of the government’s crackdown after a failed July 15 coup attempt.

A top Turkish official also accused some European countries of downplaying the grave danger posed by the failed insurrection, an apparent response to Western concerns about possible human rights violations in the government’s crackdown.

“Some European colleagues think this is a Pokemon game, this coup attempt,” said Omer Celik Turkey’s minister for EU affairs. “Come here and see how serious this is. This is not something we play in a virtual game. This is happening in real time in Turkey.”

President Recep Tayyip Erdogan also sharply criticized concerns that the large-scale purges, which have left at least 10,000 people in jail and about 50,000 fired or suspended, could jeopardize basic freedoms. Erdogan told France 24 on Saturday that Turkey has no choice but to impose stringent security measures, after the attempted coup that killed about 290 people and was put down by loyalist forces and protesters.

“We are duty-bound to take these measures. Our Western friends fail to see it that way. I cannot understand why,” Erdogan said. “I’m under the impression that they will only see that once all the political leaders of Turkey are killed, and then they’ll start to dance for joy.”

Turkey has imposed a three-month state of emergency and detained or dismissed tens of thousands of people in the military, the judiciary, the education system and other institutions. Turkish leaders allege that supporters of a U.S.-based cleric, Fethullah Gulen, infiltrated state agencies and groomed loyalists in a vast network of private schools as part of an elaborate, long-term plan to take over the country.

Gulen, a critic and former ally of Erdogan, has denied any knowledge of the attempted coup.

Turkey to Shut Hundreds of Schools in Anti-Coup Measure

Turkish officials say they will respect the rule of law during the state of emergency, although some commentators have wondered whether the purges are targeting opponents of Erdogan who had nothing to do with the coup.

The Turkish treasury and a state agency that regulates foundations have taken over more than 1,200 foundations and associations, about 1,000 private educational institutions and student dormitories, 35 health care institutions, 19 labor groups and 15 universities, the state-run Anadolu news agency reported Saturday.

Those institutions “belong to, have ties with or are in communication with” the Gulen movement, according to a decree published Saturday in Turkey’s official gazette.

Turkey has criticized the United States for not immediately handing over the cleric for prosecution. President Barack Obama says there is a legal process for extradition and has encouraged Turkey to present whatever evidence it has against Gulen.

Turkish judges, military personnel, prosecutors and other civil servants who have been dismissed will lose any gun and pilot licenses and will have to vacate any publicly funded residences where they live within 15 days, according to the decree. Those dismissed cannot work in the public sector and cannot work for private security firms.

The decree also extended the period that suspects can be detained without charge up to 30 days. All detainees’ communications with their lawyers can be monitored upon order of the public prosecutor’s office.

Also Saturday, newly released video from the night of the coup attempt shows renegade soldiers arriving at an Istanbul social club and rounding up top air force commanders attending the wedding ceremony of a commander’s daughter.

The video, released by police and broadcast by Turkish media, shows soldiers ushering men in suits, some of them with their hands bound, around a club area. At one point, two detainees sit in armchairs as a soldier in full combat gear walks over and drinks from a glass.

The commanders, including air force chief Gen. Abidin Unal, were removed by helicopter and later released when the coup attempt collapsed, according to Turkish media reports.