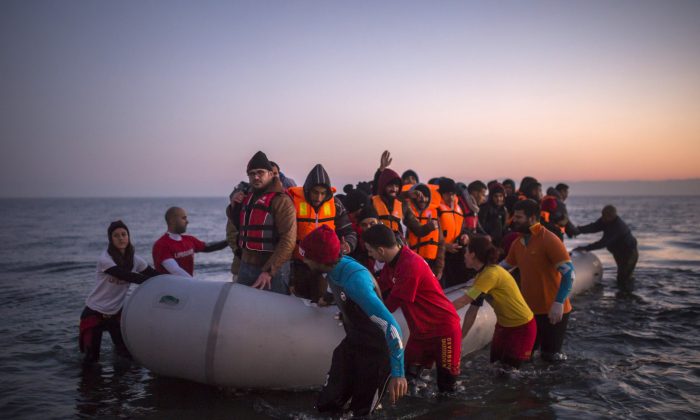 Volunteers help refugees and migrants who are approaching the Greek island of Lesbos on a dinghy after crossing the Aegean sea from the Turkey's coast on Dec. 7, 2015. (AP Photo/Santi Palacios)
Europe

ISTANBUL—Another 19 people, including six children, drowned Thursday in the waters of the Aegean off the coast of the Turkish city of Izmir after their boat capsized.

The Turkish coast guard said rescue teams managed to save 21 people and were still looking for one other survivor. The boat capsized near the town of Dikili, which lies directly across from the Greek Island of Lesbos.

There was no mention of nationalities.

Thursday’s deaths are the third in as many days between Turkey’s southwestern coast and nearby Greek islands and coincides with falling temperatures and rougher seas.

The Greek coastguard on Wednesday said a small plastic boat carrying migrants from Turkey sank off the small island of Farmakonissi, drowning at least 13, mostly children. Another 11 migrants died Tuesday in the Aegean.

Earlier this week, the Geneva-based International Organization for Migrants said more than 1 million asylum-seekers have entered Europe, almost all arriving by sea. It said 3,692 people have drowned trying to get into Europe.

Most people entered Europe via Greece, which took in 820,000 people this year, nearly all of them crossing from Turkey by boat across the Aegean Sea. Of the deaths, the IOM said 706 drowned trying to get to Greece.

In an effort to stanch the flow, the European Union, which is facing its biggest refugee crisis since World War II, has earmarked $3.2 billion for Turkey to deal with migrants in its territory.

Turkey, which according to the authorities is hosting 2.5 million Syrian refugees, is a stepping stone for migrants fleeing war and seeking better economic opportunities in the European Union.