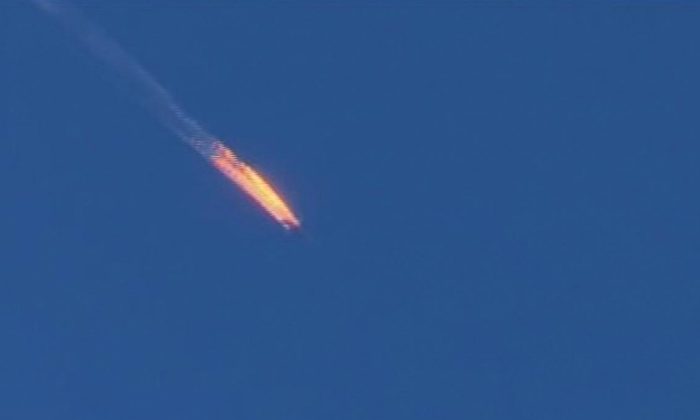 A tug-of-war over a Russian warplane downed by a Turkish fighter jet at the border with Syria escalated Thursday, with Moscow drafting a slew of economic sanctions against Turkey and the Turkish president defiantly declaring that his military will shoot down any new intruder.

The spat reflected a clash of ambitions of two strongman leaders, neither of whom appeared willing to back down and search for a compromise.

Turkey shot down the Russian Su-24 military jet on Tuesday, insisting it had violated its airspace despite repeated warnings. The incident marked the first time in half a century that a NATO member shot down a Russian plane, raising the threat of a military confrontation between the alliance and Moscow.

Russian President Vladimir Putin denounced the Turkish action as a “treacherous stab in the back,” and insisted that the plane was downed over Syrian territory in violation of international law.

“Until that moment, we haven’t heard a clear apology from Turkey’s top political leadership, or an offer to compensate for the damage or a promise to punish the criminals,” he said at the Kremlin while receiving credentials from several ambassadors. “It gives an impression that the Turkish leadership is deliberately driving Russian-Turkish relations into a deadlock, and we regret that.”

But Turkish President Recep Tayyip Erdogan was in no mood to apologize, and warned that Ankara would act in the same way in the event of another intrusion.

Erdogan said Turkey had not specifically targeted Russia when it shot down the plane, saying it was “an automatic response” in line with its rules of engagement.

What Temperature to Cook a Turkey – How Long? How to Take Its Temperature?

He spoke on a more conciliatory note in separate comments on France 24. Asked if Turkey would still have targeted the plane if it positively knew it was Russian, he said: “If we had determined it, the warnings would have been different.”

The Russian and Turkish leaders are often compared to each other. Both are populist, frequently crack down on critics and often revert to anti-Western rhetoric. They had enjoyed close relations until recently, despite differences over Syria, and regularly exchanged visits. In September, Erdogan traveled to Moscow where he and Putin attended the opening of a new mosque, and they also met separately at the sidelines of the Group of 20 summit hosted by Turkey.

On Thursday, Erdogan told France 24 television in an interview that he had tried talking to Putin but that the Russian leader did not respond.

Turkey has released audio recordings of what it says are the Turkish military’s repeated warnings to the pilot of a Russian bomber before it was shot down at the border with Syria.

The recordings, made available to The Associated Press on Thursday, indicate the plane was warned several times that it was approaching Turkey’s airspace and asked to change course, but there is no indication of a Russian reply.

In the recordings, a voice is heard saying in broken English: “This is Turkish Air Force speaking on guard. You are approaching Turkish airspace. Change your heading south immediately.” The voice gets increasingly agitated as the warnings appear to go unnoticed.

A Russian airman who survived the shoot-down and was later rescued by the Syrian and Russian commando, denied veering into Turkey’s airspace “even for a single second.” Turkey insists the plane was in its airspace for 17 seconds.

Capt. Konstantin Murakhtin also said he and his crewmate, who was killed by ground fire after bailing out, hadn’t heard any Turkish warnings. The Russian Foreign Ministry dismissed the audio recording released by Ankara as a fake.

Erdogan accused Russia of using its declared goal to fight the Islamic State group in Syria as a pretext to target opposition groups including the Turkmen, in order to shore up Syrian President Bashar Assad.

He also challenged Russia to prove its accusation that Turkey is buying oil and gas from IS, calling the claims “shameful” and even pledging to step down if the claim is proven.

“This is a great disrespect to Turkey and those who make the claims are slanderers,” he said. “If they prove it, Tayyip Erdogan would step down.”

Putin responded to the plane’s downing by ordering the deployment of powerful long-range air defense missiles to a Russian air base in Syria.

On Thursday, Russian state television stations ran a report showing the S-400 missiles already deployed at the Hemeimeem air base in Syria’s coastal province of Latakia, just 50 kilometers (30 miles) away from the border with Turkey.

The Russian Defense Ministry has warned that the military was prepared to destroy any aerial target that may threaten its warplanes, and announced the severance of all military ties with Turkey.

Concerned by the move, Turkey’s High Military Council, which included top government and military leaders, called Thursday for keeping all diplomatic and military channels of communication open to avoid new “undesired” incidents on the Turkey-Syria border.

In addition to the military moves, the Kremlin also acted Thursday to inflict economic pain on Turkey.

Since the plane was downed, Russia has already restricted tourism, left Turkish trucks stranded at the border and announced the confiscation of large quantities of Turkish food imports.

Russia was the biggest source of Turkish imports last year, worth $25 billion, which mostly accounted for Russian gas supplies. It also is the largest destination for Turkish exports, mostly textiles and food, and Turkish construction companies have won a sizable niche of the Russian market.