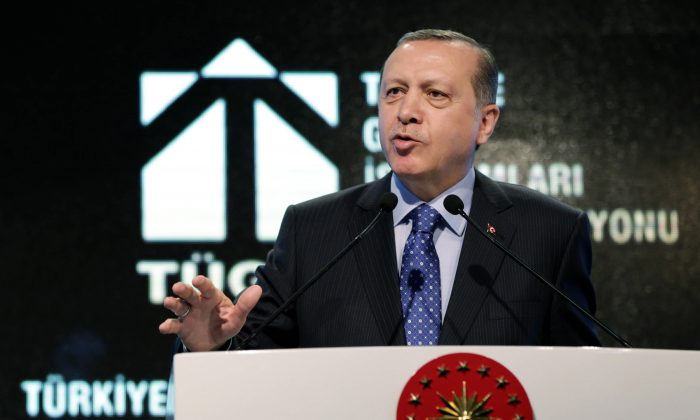 Turkish President Recep Tayyip Erdogan addresses a meeting in Ankara, Turkey, on Feb. 11, 2016. Erdogan has confirmed the minutes of a leaked conversation between himself and top European Union officials last year in which he threatens to send buses full of migrants to Europe if a favorable deal on handling the crisis is not reached. Erdogan said Thursday the minutes showed that he had defended the rights of Turkey and of the Syrians, adding it was not “a document of shame.” (Murat Cetinmuhurdar/Presidential Press Service via AP)
International

ANKARA, Turkey—Turkey all but turned a blind eye last year as more than 850,000 people, most of them Syrians, slipped into Greece from Turkey on smugglers’ boats. Now it’s promised the European Union that will change.

Since reaching a deal with the EU in November, Turkey has stepped up its counter-smuggling efforts, increasing sea patrols, detaining thousands before they make the sea crossings, cracking down on trafficking groups and raiding workshops that produce bogus lifejackets or dinghies.

In return for trying to stem the flux, Turkey is set to receive a 3 billion-euro ($3.3 billion) fund to help it deal with the refugee crisis, a much-awaited easing of EU visa restrictions for Turkish citizens and sped-up EU membership talks.

The government—under pressure to get results before a key meeting March 7 with the EU—is upbeat, insisting the measures have already made a “visible difference.” But the thousands of migrants still entering Greece every week paint a different picture, underscoring the uphill battle that Turkey and Europe face.

There has been a visible decrease in the numbers of migrants crossing illegally. To reduce the numbers to zero, however, is impossible. No country has the power to do so.
— Numan Kurtulmus, deputy prime minister, Turkey

“There has been a visible decrease in the numbers of migrants crossing illegally,” Deputy Prime Minister Numan Kurtulmus told journalists. But he quickly added: “To reduce the numbers to zero, however, is impossible. No country has the power to do so.”

The International Organization for Migration says more than 102,500 people have crossed into Greece and more than 7,500 into Italy this year. Last year, that number wasn’t reached before June.

For Turkey to take control of a land-and-sea border that exceeds 10,000 kilometers (6,215 miles) is a huge challenge. The Aegean coast is deeply indented by coves and bays, a perfect venue for smugglers. A senior Turkish government official conceded that stemming the tide of refugees is a “complex task” and it would take time for Turkey’s “major efforts” to produce results. He requested anonymity because he was not authorized to speak publicly.

In response to the crisis, NATO has ordered three warships to sail to the Aegean Sea to help Greece, Turkey and the EU border agency Frontex conduct sea patrols.

In the meantime, Turkey has its own migration issues. The number of refugees Turkey is now hosting has swelled to 3 million—2.6 million of them from Syria—so that last year Turkey overtook Pakistan as the country with the largest refugee population in the world. Along with that, Turkey remains on the main transit route for migrants heading to Europe.

Turkey last year stopped 156,000 migrants attempting to make the illegal journey, including 91,000 caught at sea, Kurtulmus said. It also apprehended nearly 4,800 smugglers in 2015, half of who are on trial or face prosecution, he said.

Last month, Turkey started to require Syrians arriving from third countries to apply for visas in a bid to exclude those who aim to continue on to Greece. It also has agreed to grant work permits to Syrians as an incentive for them to stay in Turkey.

The government has vowed to increase the coast guard’s ability to patrol the coast and plans to pass a law that would make human smuggling an organized crime or even a “terror crime,” allowing courts to hand down stiffer punishment.

To encourage refugees to build new lives in Turkey, Ankara has also vowed to make sure that all school-aged Syrian refugee children attend school in the 2016-2017 academic year. Currently, only 350,000 of the approximately 650,000 refugee children go to school, a government official said.

In a dramatic police operation last month, authorities raided workshops in the Aegean coastal city of Izmir and elsewhere that were manufacturing defective lifejackets that were being sold to migrants. More than 1,200 lifejackets were seized. Earlier this month, police also raided three factories in Izmir that were producing poor-quality inflatable boats to smuggle migrants to Greece.

As it tries to prevent the flow of migrants to Europe, Turkey is also constructing a wall along parts of its 910-kilometer (560-mile) border with Syria, mainly to prevent infiltrations by Islamic State militants. In a reversal of its long-standing open door-policy for refugees, Turkey recently closed its border to tens of thousands of Syrians fleeing a Russian-backed Syrian government onslaught around northern Syrian city of Aleppo. Turkish authorities decided instead to help the displaced by expanding and setting up new camps close to the border in Syria.

Sylvie Guillaume, a vice president of the European Parliament, told reporters during a visit that Turkey and the EU must work together to crack down on the smugglers by tracking their finances.

“It’s a flourishing business,” Guillaume said. “It is an industry in which people are making millions on the backs of people who then die at sea. Financial surveillance and inspection mechanisms need to be developed” to uncover these gangs.

Associated Press reporters witnessed stepped-up police measures this month at the town of Ayvacik, a major crossing point for migrants heading to the Greek island of Lesbos. At the scene, police detained scores of migrants hiding amid bushes, waiting for smugglers to take them across the water. On the sea, Turkish coast guard boats intercepted smuggling boats full of migrants and escorted them back to shore.

“We know the organizers’ crossing points and we are taking extremely effective measures against them,” Kurtulmus said. “With our strong measures, the numbers will (decrease) further.”