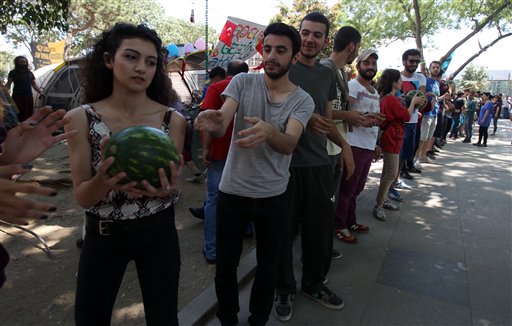 Protesters form a human chain to carry watermelons at the Gezi Park of Taksim Square in Istanbul, Monday, June 10, 2013. Turkey's Prime Minister Recep Tayyip Erdogan said he would meet with a group of protestors on June 12, as the protests entered their 11th day on June 10. (AP Photo/Thanassis Stavrakis)
Middle East

Turkey PM to Meet with Some Istanbul Protestors

Turkey’s prime minister will meet with a group of protesters occupying Istanbul’s central Taksim Square this week, the deputy prime minister said Monday, as the government sought a way out of the impasse that has led to hundreds of protests in dozens of cities.

“Our prime minister has given an appointment to some of the groups leading these protests…. They will be briefed on the facts and our prime minister will listen to their thoughts,” deputy premier Bulent Arinc, according to AFP.

Arinc also said, however, the government would no longer tolerate “illegal acts,” and implied that the occupation of Taksim and its accompanying Gezi Park would be over by the weekend.

“Illegal acts in Turkey from now won’t be allowed and whatever needs to be done according to the law will be done,” he said after a Cabinet meeting chaired by Prime Minister Recep Tayyip Erdogan. “All necessary actions against illegal acts will have been completed, and we will see this all together, by the weekend.”

The protests appeared on the wane, with the smallest number of demonstrators in the past 11 days gathering in Taksim on Monday night. The protesters occupying Gezi Park remain, however.

Smaller protests occurred in Ankara too, with about 5,000 people demonstrating. Police there have used water cannon and tear gas to break up demonstrations almost every night.

Three people have died and more than 5,000 have been treated for injuries or the effects of gas during the protests. The government says 600 police officers have also been injured.

Erdogan will meet Gezi Park protesters Wednesday, following a request by some of the protesters, Arinc said, but not at the square. With no clear leadership organizing the Gezi occupation, it was unclear who the prime minister would be meeting.

The meeting announcement comes a day after Erdogan condemned the protesters while greeting supporters, speaking from on top of a bus in the city of Adana.

The anti-government protests started when the police forcefully broke up peaceful protests against the construction of a shopping mall on park grounds May 31. A string of events leading up to May 31, however, had already stoked the rage that burst into protests that are now into their tenth day.

Two weeks ago, the Turkish parliament passed a bill restricting alcohol sales and banning alcohol advertisements, a move criticized by some secular Turks. The bill was signed into law by President Abdullah Gul on Monday.

Other issues are large urban-planning projects, such as a third airport and a new bridge over the Bosporus, which will uproot thousands of trees, environmentalists say.

Arinc, the deputy prime minister, said that if a court makes a temporary halt work order on the park project permanent, than the government would look at starting the work again in a different fashion.