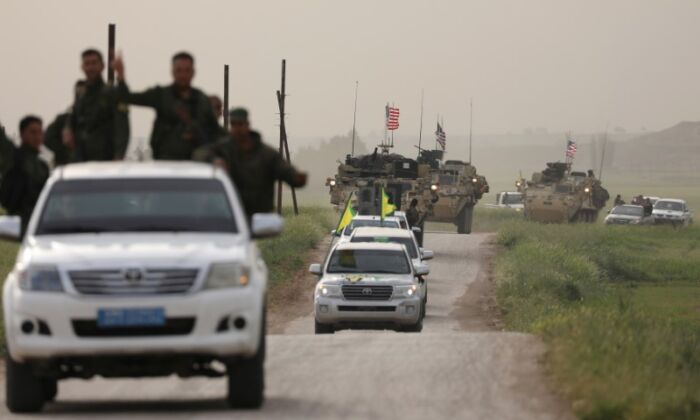 Kurdish fighters from the People's Protection Units (YPG) head a convoy of U.S. military vehicles in the town of Darbasiya next to the Turkish border, Syria April 28, 2017. (Rodi Said/Reuters)
World

“We have told our allies that Turkey will say ‘no’ to Sweden and Finland joining NATO and we intend to maintain this position,” Turkish President Recep Tayyip Erdogan said on May 19.

Oytun Orhan, an expert on foreign policy issues at the Ankara-based Center for Middle Eastern Studies, told The Epoch Times that while Erdogan appears “firmly opposed” to the move, “statements by other high-level officials suggest that they’re leaving the door open to compromise.”

Before joining NATO, new applicants must be unanimously approved by the organization’s 30 existing members.

This includes Turkey, NATO’s easternmost member, which joined the alliance in 1952 and which possesses its second-largest army after the United States.

Since NATO’s inception in 1949, both Sweden and Finland have remained outside the alliance, opting instead for a policy of neutrality. But following the launch in February of Russia’s “special military operation” in Ukraine, both countries abruptly changed course, announcing plans to join the Brussels-based organization.

Turkey responded by vowing to block the move, describing both aspiring members—especially Sweden—as “guesthouses” for the Kurdistan Workers Party (PKK) and its Syrian offshoot, the YPG (People’s Defense Units), both of which Ankara views as terrorist groups.

“The PKK operates freely in Sweden; not militarily, of course, but it openly engages in political and economic activities there,” Orhan told The Epoch Times. “There are a number of wanted PKK members who have fled Turkey and are now living in Sweden, and also in Finland.”

Over the course of the past several years, the two countries have turned down multiple requests by Ankara for the extradition of wanted PKK members.

“Turkey would like to see these issues resolved before it gives the green light to their joining NATO,” Orhan said.

Currently based in northern Iraq, the PKK has carried out numerous attacks inside Turkey over the course of its 45-year history. The group seeks to establish a sovereign Kurdish state in parts of Turkey, Iran, Syria, and Iraq—a scenario Ankara steadfastly refuses to countenance.

‘Bigger than Sweden and Finland’

Like Turkey, both the United States and the EU regard the PKK as a terrorist group. But the designation doesn’t apply to the YPG, which Western countries have supported in Syria in their wars against the Islamic State and the (Bashar) al-Assad regime.

“Our NATO allies—led by the United States—still openly support the group in Syria and Iraq,” Halil Akinci, a prominent Turkish political analyst and former ambassador to Russia, told The Epoch Times. “But whether you call it ‘PKK’ or ‘YPG,’ the group threatens the stability and territorial integrity of every state in the region.”

He added, “We can’t point the finger at Sweden and Finland without also mentioning leading NATO members who do the same thing.”

Since 2016, Turkey has launched several cross-border military operations into both Syria and Iraq with the stated aim of “protecting Turkey’s borders from YPG terrorists.”

According to Orhan, Sweden in particular has made no secret of its support for the YPG. He cited a meeting in Stockholm last December between Swedish Foreign Minister Ann Linde and YPG officials in which Sweden pledged $376 million in aid to the group.

In a statement issued before the meeting, he reiterated Turkey’s stated position, saying: “Countries that support terrorism should not be members of NATO.”

Speaking to reporters shortly afterwards, Linde conceded that Stockholm viewed the PKK as a “terrorist organization.”

She qualified this assertion, however, by adding, “We don’t think the same about the formation in northern Syria [the YPG]—and neither do many NATO countries.”

According to Orhan, the issue is bigger than just Sweden, Finland and Turkey.

“It also involves Turkey’s relationship with the United States and EU,” he said.

He believes Washington will try to persuade Turkey to let the two counties join NATO by offering concessions on other issues.

“We may see concessions [by the United States] related to the YPG and Turkey’s concerns in Syria,” he said.

Meanwhile, diplomats from both Sweden and Finland are expected to visit Ankara in coming days for more talks. On May 18, Cavusoglu flew to Washington to discuss the issue with U.S. officials.

“Turkey isn’t opposed in principle to NATO expansion,” Orhan said. “That being said, NATO is a security alliance, so it should take the legitimate security concerns of its members into account.”