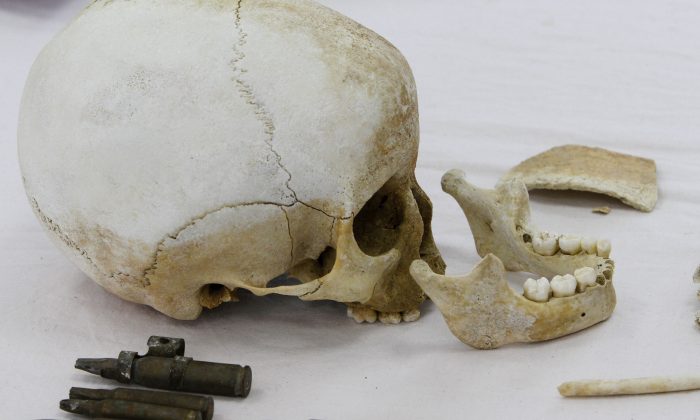 In this Feb. 10, 2010 file photo, a skull and bullets are shown at the Anthropological Laboratory, inside the United Nations controlled buffer zone in the divided capital of Nicosia, Cyprus.
Europe

Turkey Opens Military Areas in Cyprus to Search for Missing

NICOSIA, Cyprus—Turkey has granted access to 30 suspected grave sites in military-controlled areas in northern Cyprus, a move that will significantly speed up exhumation work, an official with a committee searching for missing persons on the war-divided island nation said Thursday.

Paul-Henri Arni, the U.N.-appointed member of the Committee on Missing Persons, said such access will accelerate the work to an estimated three years. He said it’s important to move ahead quickly because many witnesses with information on such graves are elderly.

“It’s a race against time,” Arni told The Associated Press. “The only credible sources of information we have are these witnesses and they’re dying fast.”

Cyprus was split along ethnic lines in 1974 when Turkey invaded after a coup by supporters of union with Greece. Some 1,500 Greek Cypriots and 500 Turkish Cypriots had disappeared from the mid-1960s during fighting between the two communities, as well as the invasion.

In the last decade, the remains of 1,020 people have been exhumed.

Turkey continues to maintain some 35,000 people in the island’s north, where Turkish Cypriots declared independence that’s recognized only by Ankara.

It’s not the first time that Turkey has allowed crews to dig in military-controlled areas that dot the island’s north and where access is strictly prohibited. But Arni said “it was too little, too late” because work had proceeded so slowly. He said his group has information of possible burials regarding all 30 sites, but declined to give an estimate on how many people might be buried there.

Turkey’s decision comes as U.N.-brokered talks aimed at reunifying Cyprus have been significantly ramped up.

Greek Cypriot officials have urged Turkey to help ease the exhumation work as a sign of its willingness to help peace talks.