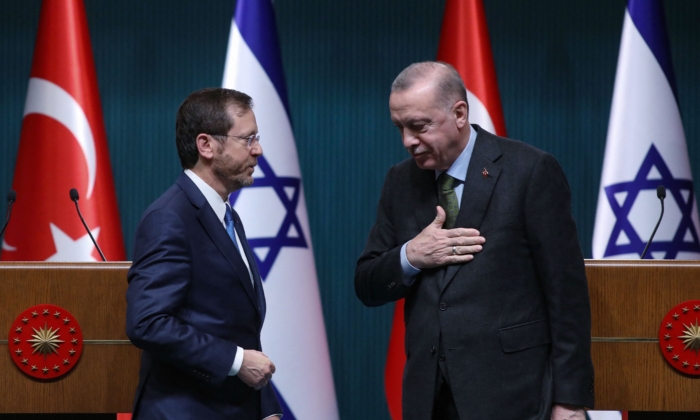 Israeli President Isaac Herzog (L) stands next to his Turkish counterpart Tayyip Erdogan after a press conference in Ankara, on March 9, 2022. (Photo by AFP) (Photo by STR/AFP via Getty Images)
Middle East

ANKARA – Turkey and Israel this week announced plans to exchange ambassadors after four years of downgraded diplomatic relations. The move will effectively normalize ties, despite ongoing differences between the two countries over the issue of Palestine and the blockaded Gaza Strip.
According to Turkish political analyst Oytun Orhan, the move is part of a wider trend towards diplomatic normalization involving several states of the region.

“Regional actors are tired of conflict,” Orhan, a Levant expert at Ankara’s Center for Middle Eastern Studies, told The Epoch Times. “They’re keen to resolve their longstanding differences and enjoy the fruits of economic cooperation and trade.”

Turkey was the first Muslim country to recognize Israel following the latter’s establishment in 1948. For the next several decades, Ankara— unlike Arab capitals—maintained relatively close relations with Israel, which often included military cooperation.

But ties have been strained since 2002, which saw the rise to power in Turkey of the Islamist-leaning Justice and Development Party. President Recep Tayyip Erdogan, the party’s longtime leader, has staunchly supported Palestinian national aspirations and has been an outspoken critic of Israel’s treatment of the Palestinians, especially those in the Gaza Strip.

Home to more than two million Palestinians, the Gaza Strip has remained hermetically sealed since 2007 by a punishing Israeli-Egyptian blockade.
Turkey-Israel relations bottomed out in 2010, when Israeli forces intercepted a Turkish aid flotilla off Gaza’s coast, killing ten Turkish activists. Subsequent attempts to mend ties ended in 2018, when the two countries withdrew their respective ambassadors amid ongoing violence along the Gaza-Israel border.

Relations remained frosty until July of 2021, when Erdogan called his Israeli counterpart, Isaac Herzog, following the latter’s assumption of the presidency. In March of this year, Herzog visited Ankara and met with Erdogan, prompting renewed speculation that rapprochement was imminent.

Two months later, Turkish Foreign Minister Mevlut Cavusoglu visited Israel, becoming the first Turkish FM to do so in 15 years. During the visit, Israel’s then foreign minister (and current prime minister) Yair Lapid hailed what he described as a “new chapter” in bilateral relations.

“Once it happens, the exchange of ambassadors will be the final step in the normalization process that began last year,” Orhan said. “Then the two sides can focus on areas of cooperation—including trade, energy, security and tourism—and begin work on resolving their political differences.”

Prospects for rapprochement were briefly thrown into doubt on Aug. 5, when Israeli warplanes pounded the Gaza Strip. An Israeli spokesperson said the strikes had killed Islamic Jihad commander Tayseer al-Jaabari and around 15 “terrorists” but said the military did not have a final casualty total. Local health officials in Gaza said at least 10 people, including a five-year-old child, had been killed and 55 wounded in the airstrikes.

The Turkish Foreign Ministry condemned the Israeli airstrikes, describing them as “unacceptable.” But the sudden flare-up of Israel-Palestine violence, the worst in more than a year, failed to draw any further reaction from Ankara.

“Both sides are trying to tone down their mutual criticisms so as not to derail the normalization process,” Orhan said. “Of course, a full-scale Israeli assault on Gaza leading to thousands of Palestinian casualties, as was seen in 2009 and 2014, would elicit a much stronger response.”

Turkish officials have repeatedly stressed that upgraded ties with Israel will not come at the expense of Ankara’s longstanding commitment to Palestinian rights.

“We will continue to defend the rights of Palestine, Jerusalem and Gaza,” Cavusoglu said on Aug. 17.

“It’s important that our position on these issues is delivered directly to Tel Aviv at the ambassadorial level.”

Orhan believes that the full restoration of Turkey-Israel ties is part of a wider trend towards diplomatic normalization now underway throughout the region.

“We’re seeing this throughout the Middle East,” he said. “For example, Israel is also attempting to normalize ties with the Gulf States, while the Gulf States themselves only recently ended their own internal diplomatic crisis.”

“Meanwhile,” Orhan said, “the Syrian regime is now in the process of normalizing ties with some Arab countries after years of antagonism, including Jordan, the UAE, and Bahrain.”

Orhan attributes the trend to both international regional factors.

“The Trump Administration was more supportive of Washington’s traditional allies in the region, while the Biden Administration has reduced this support and signaled a general withdrawal from the Middle East,” he said.

“This has prompted many regional actors to adopt increasingly independent policies, since they no longer view the US as a reliable partner capable of providing security,” he added.

Meanwhile, on the regional level, Orhan contends that many states of the region are simply experiencing something akin to combat fatigue.

“A decade after the Arab Spring, everyone’s tired of unwinnable conflicts – in Yemen, Libya, Syria and Lebanon,” he said.

“They want to end this perpetual lose-lose game by normalizing relations, thereby paving the way for bilateral trade and economic cooperation.”

Ankara, for example, hopes to strike a deal with Israel that would allow Israeli natural gas from the Eastern Mediterranean to be transferred through Turkey to energy-hungry markets in Europe.

“This was one of the primary motivations for normalized ties,” Orhan said.

Correction: An earlier version of this article presented a contested claim about the people killed in the Aug. 5 airstrikes as fact. The Epoch Times regrets the error.