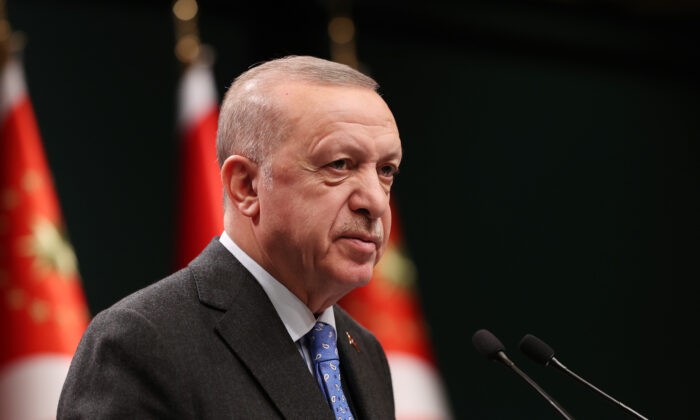 Turkey's President Recep Tayyip Erdogan made a statement after the cabinet meeting with the agenda of Russia and Ukraine in Ankara, Turkey, on Feb. 28, 2022. (Presidential Press Office via dia images via Getty Images)
Middle East

Inflation in Turkey has hit multi-decade highs as policies implemented by President Tayyip Erdogan continue to take a toll on the country’s economy.

The Consumer Price Index (CPI), a measure of inflation, rose by 78.62 percent annually and 4.95 percent monthly in June, according to a July 4 press release by the Turkish Statistical Institute. This is the highest annual rate of inflation since September 1998 when it hit 80.4 percent. On a monthly basis, transportation costs rose by 10.59 percent, housing by 8.34 percent, and food and non-alcoholic beverages by 2.09 percent.

Transportation rose the highest on an annual basis, surging by 123.37 percent. This was followed by food and non-alcoholic beverages at 93.93 percent, furnishings and household equipment at 81.14 percent, hotels, cafes, and restaurants at 79.55 percent, housing at 75.09 percent, and alcoholic beverages and tobacco at 70.99 percent.

In an interview with Reuters, Witold Bahrke, a senior macro strategist at Nordea Asset Management based in Denmark, categorized Turkey as being in a “league of its own” when it comes to inflation in the emerging markets. He blamed it on the lack of credible policy response.

“Inflation is a general issue for [emerging markets]. And in Turkey, you end up with a toxic mix as we also have a policy issue,” Bahrke said, adding that he expects the lira to weaken further. Last year, the Lira lost 44 percent of its value against the U.S. dollar. This year, it’s down by 21 percent.

Though Turkey is facing the same inflationary pressures as other nations, Erdogan’s policies are said to have worsened the crisis, crashing the value of the lira and making imports more expensive.

While central banks of major nations are raising interest rates to fight off inflation, Erdogan instructed the country’s central bank in September to cut rates. Since December, Turkey has maintained interest rates at 14 percent. Erdogan has defended his financial policies, arguing that lowering rates will boost exports and lower inflation.

Last month, Erdogan said that Turkey would continue pushing down interest rates rather than hike them despite the high cost of living. The president is expecting inflation to come down to “appropriate” levels by February or March next year.

“Given the imbalances, an economic soft-landing seems to be the best-case scenario but achieving that is not going to be easy or desirable ahead of the elections,” Emre Akcakmak, a Dubai-based senior consultant to East Capital, told Reuters.

Barclays is expecting Turkey’s inflation to peak at about 88 percent on an annual basis in October and then to slow down to 67 percent by the end of this year.