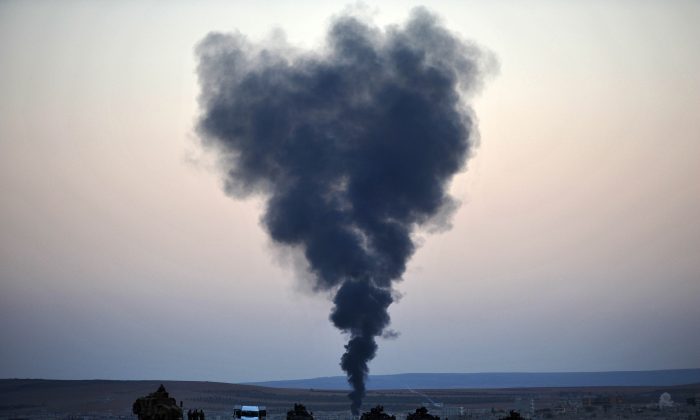 Thick smoke rises from the Syrian town of Kobani as Turkish soldiers stand guard on the Turkish side of the border during fighting between ISIL militants and Kurdish People's Protection Unit forces, as seen from the Mursitpinar crossing on the Turkish-Syrian border on Oct 26, 2014. Since mid-September, more than 200,000 people from Kobani have fled into Turkey. (Kutluhan Cucel/Getty Images)
Middle East

Turkey in the Crosshairs: Kurds From Iraq, Syria, and Turkey Should Unite to Fight ISIL on the Ground

Following the recent tragic deaths of two Canadian soldiers at the hands of domestic terrorists, who both appeared to be seeking to assist the Islamic State in Iraq and the Levant (ISIL), some Canadians might feel that our country should quit the international coalition confronting ISIL.

The murders, however, appear likely to cause more Canadians to be cautiously favorable to continue the air campaign against jihadi fighters, who have been denounced by Muslim leaders and believers worldwide.

The campaign against the estimated 20,000 mostly Sunni combatants of ISIL in Iraq and Syria can probably only be won decisively by soldiers. If so, the challenge is to obtain ground troops quickly from regional governments and communities, such as the Kurds, who are already confronting ISIL effectively. President Recep Tayyip Erdogan of Turkey understandably queries why his soldiers are being pushed to intervene when other NATO members refuse to send ground troops.

In an encouraging recent reversal, Erdogan will allow Iraqi Kurdish fighters to cross from his country into Syria to assist fellow Kurds in defending the border town of Kobani. Erdogan has for three years been preoccupied with ousting Syria’s Bashar al-Assad. Most in the international coalition regard ISIL as a worse immediate threat than Assad; he has thus received little encouragement on this priority.

It is important to understand Turkey, its president, and his particular challenges. The founding of the modern republic in 1923 under the brilliant leadership of Kemal Ataturk ended the Ottoman caliphates and sultanates and proved to be major world events. Today as a democracy, NATO member, and having a strong economy and almost 80 million citizens—mostly of Sunni Muslim faith—Turkey has become a key regional and international power linking Asia and Europe.

The Turkish reality includes a distinct, 15 million-strong Kurdish community, which, seeking full nationhood, has rebelled at several points. Its 1937–38 uprising, for example, sparked by Ankara’s massive population resettlements, saw 50,000–70,000 Kurds and Alevis killed. In the 1970s, Kurdish separatists coalesced into the Marxist Kurdistan Workers’ Party (PKK) and in 1984 launched a 15-year bloody war against the national government. The conflict finally tapered off after the capture of the PKK’s leader, Abdullah Ocalan; Erdogan must handle matters especially delicately at present if the crucial peace negotiations are not to be broken off.

Fighters From the Region

American and other coalition air forces are providing essential help in Kobani and elsewhere with air strikes and drops of arms and humanitarian aid, but for a host of historical and other reasons fighters from the region seem best to do the door-to-door fighting rather the Americans, Canadians, or others from distant lands.

In Iraq, the moderate Sunni, tribal, and other national communities were systematically abused by the Shiite-based regime of Nouri al-Maliki for eight years. His recent successor, Prime Minister Abadi, is doing better at inclusion, but there are disturbing indications that ISIL is only a few kilometers away from Baghdad international airport. Many residents of Baghdad do not believe that the remaining Iraqi army will be able to protect them if ISIL attacks the capital.

The best hope for all ISIL opponents in Iraq is probably the Kurds from Iraq, Syria, and Turkey working in combination with revitalized Iraqi government soldiers, and air strikes from the international coalition.

In Syria, however, where its disintegration would threaten the five nations on its borders and indirectly the entire region, there is no combat-ready force. The Pentagon has announced that it will take three to five months to identify and vet fighters from the Syrian opposition and another year to train them. What will happen, other than air strikes, in the meantime?

Obama is refusing to deploy U.S. military power in Syria until there is an outline of a political agreement. Former U.N. Secretary-General Kofi Annan and the international public servant Lakhdar Brahimi could not find one. Half a dozen powers ensured that a military equilibrium was never reached. Russia, Iran, and Hezbollah backed Assad; Saudi Arabia, some Gulf states, and the United States backed the opposition.

Sunni Saudi Arabia and Shiite Iran now share a common interest in defeating ISIL before the chaos it brings reaches their own borders. The Assad regime and the non-jihadi opposition groups in Syria might thus be able to achieve unilateral truces.

The Assad government has suffered heavy casualties at ISIL’s hands and has raised the prices of food, water, and electricity for people already suffering from drastic shortages. The opposition forces centered on the Free Syrian Army are close to losing control of their last border crossing to Turkey. Assad’s forces and the moderate opposition are both vulnerable, but Assad would never agree to such a truce without a push from Iran as his most important backer.

It is difficult for Syrians to accept that the countries in the Gulf and elsewhere that supported ISIL with arms, financing, and fighters are now joining an American-led coalition to bring it down. Yet ISIL may have gone too far even for its own backers. ISIL looks to the Iranian regime as its mentor. What ISIL has been doing in Syria and Iraq, the Iranian regime has been doing for the past 35 years. The only difference is that Tehran is not doing it in front of cameras for the entire world to see.

This article was previously published by Yahoo! Canada.