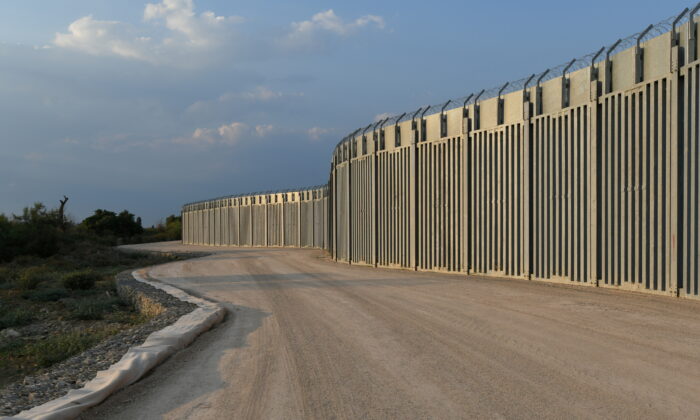 View of a steel border wall between Greece and Turkey in Alexandroupolis, Greece, on Aug. 10, 2021. (Alexandros Avramidis/Reuters)
Middle East

ISTANBUL—Turkish authorities on Thursday found seven more dead bodies near Turkey’s border with Greece, raising to 19 the number of migrants who have frozen to death at the frontier.

Turkey has blamed Greece for the deaths, accusing Greek border guards of illegally pushing the migrants back over the frontier. Greece has strongly rejected the accusation.

Turkish President Recep Tayyip Erdogan vowed on Thursday to expose what he said was Greece’s illegal pushback of migrants at every occasion.

Turkey’s interior minister said Wednesday that 12 illegal immigrants had died after allegedly being pushed back into Turkey. One of the migrants was found alive but later died in a hospital. There was no information about the migrants’ nationalities.

A statement from the governor’s office for the border province of Edirne said seven more bodies were found on Thursday. The state-run Anadolu Agency said gendarmerie forces were searching the area with the help of drones and that medical teams were on stand-by.

Turkey is a major crossing point for illegal immigrants from the Middle East, Asia, and Africa seeking a road to the European Union countries.

Most try to cross into Greece—a key gateway to the EU for illegal immigrants— by either crossing the northeastern land border or cramming into smuggling boats headed for the eastern Aegean Sea islands.

Speaking to reporters before departing for a visit to Ukraine, Erdogan accused the EU’s border and coast guard agency, Frontex, of allegedly “supporting” Greece.

Greece’s Migration Minister Notis Mitarachis on Wednesday described the deaths as a “tragedy” but strongly denied the claim that Greek forces had pushed back the migrants, insisting that the migrants never made it to the border.

He also accused Turkey of failing to prevent migrants from approaching the border area and undertaking “these dangerous journeys.”