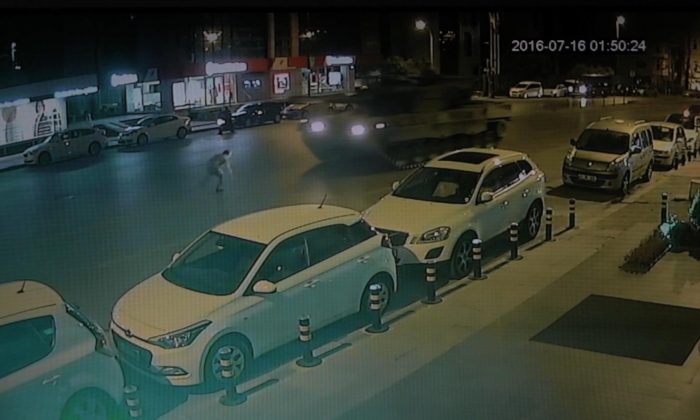 In this framegrab taken from Eminevim CCTV video, a man stands in the road as a tank approaches in Istanbul, Turkey, July 16, 2016. A man survived after two tanks ran over a him in quick succession during Friday's failed military coup. (Eminevim CCTV VIDEO via AP)
International

ISTANBUL—Video footage from Turkey’s failed coup shows a pro-government protester ducking down between the tracks of a speeding tank that passes over him. Remarkably, the man emerges unscathed and then the same thing happens with a second tank—except this time, he suffers an arm injury as the military vehicle roars above him.

Turkish media identified the protester as Sabri Unal, a civilian who is seen in closed-circuit TV footage trying to block tanks in Istanbul during the July 15 insurrection. When they don’t stop, he dives down as they drive over him. After the second tank departs, people rush to help the injured man.

The scene bears some similarity to images of a man who blocked tanks during China’s 1989 crackdown on protesters in Tiananmen Square in Beijing.