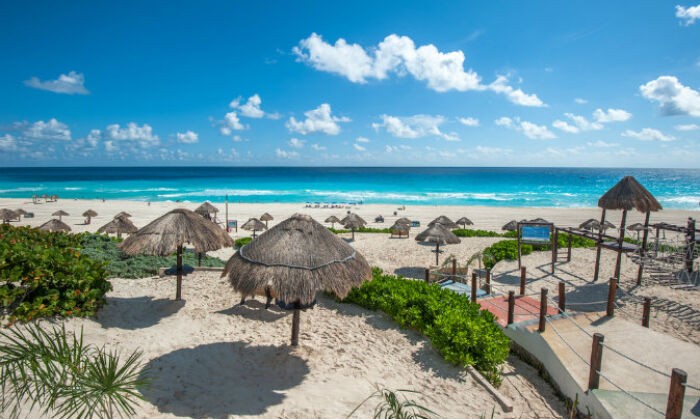 Shots fired between rival drug cartels near the Azul Beach Resort Riviera Cancun and Hyatt Ziva Riviera Cancun in the Mexican resort town of Puerto Morelos left guests shaken and administrative officials scrambling to do damage control in the state of Quintana Roo.

The Nov. 4 incident further damaged the image of a state already affected by another drug-related shooting that killed two tourists and injured three in Tulum on Oct. 21.

The common denominator between the incidents is a narcotics industry in Quintana Roo that’s fed by foreign tourism and what Gov. Carlos Joaquín calls a “culture of fear” that cartels are trying to impose on all social groups to pressure the government.

“Any incident of this type involving tourists is a threat to tourism,” Joaquín told The Epoch Times.

In his state, Joaquín said tourism is an important generator of jobs, investments, contributions, and creates what he calls ” virtuous economic circles.”

Tourism revenue accounts for 8.7 percent of the nation’s gross domestic product and is projected to surpass $1 billion by Nov. 20, according to Secretary of Tourism Miguel Torruco Marqués.

Meanwhile, splinter groups of the Sinaloa and Jalisco Nueva Generación cartels are fighting each other for a cut of the profits in Quintana Roo.

“None of this is surprising, but it also hasn’t stopped people from coming here,” Trevor Niles, a digital nomad living in Tulum, told The Epoch Times.

Niles said he’s had backpackers and fellow remote workers staying in the seaside paradise ask him where they can “score some of this or that drug” in the center of Tulum village, where many bars and cafes cater to foreign, English-speaking tourists.

He says the law of supply and demand is fueling the cartel rivalry in the famous Mexican Riviera, since tourists who want to get high on vacation need a place to buy their drugs.

Joaquín said, “These groups are the ones that satisfy the demand for toxic substances for the consumers who have been used to getting them in certain points for several years.”

The Sinaloa and Jalisco Nueva Generación cartels are among the largest and most influential drug cartels in Mexico, according to a U.S. congressional report (pdf).

However, Joaquín said steps are being taken to eliminate the threat of violence to tourists.

“In Quintana Roo, we are working in coordination with federal forces, such as the national guard, as well as with the ministry of public security and the state attorney general’s office.”

Additionally, he said the police force has been undergoing a “process of modernization,” which includes better salaries and tools to combat drug trafficking.

There is also an upgraded surveillance program that has already installed 2,000 security cameras.

“I didn’t feel unsafe for even a minute,” Kevin Anderson, a U.S. tourist who recently visited Mexico, told The Epoch Times. He stayed at an Iberostar resort in Cancún with his family the week of the October shooting that killed the two tourists in Tulum.

“It’s sad what happened to them, but I also feel like you see a lot less of that kind of stuff [drug-related violence] in nicer resorts.”

Quintana Roo businesses and resorts are bracing themselves for the onset of the tourist high season, which hits peak revenue around the holidays in December and January.

The flagship beach destination of Cancún has historically drawn up to 4 million U.S. tourists in a year.

Joaquín said there has been no lag in tourism.

“The number of airline seats continues to increase. From Nov. 10 to Dec. 31, we have registered an offer of 2.4 million seats, 50.7 percent more than the same period of the previous year.”

In Tulum, Niles continues to live and work in a Caribbean paradise amid the shadow of feuding cartels.

“It’s pretty safe to stay in the resorts, but this last one [shooting] rattled everyone since it broke the unspoken rule between the gangs: No messing with the resorts,” Niles said.