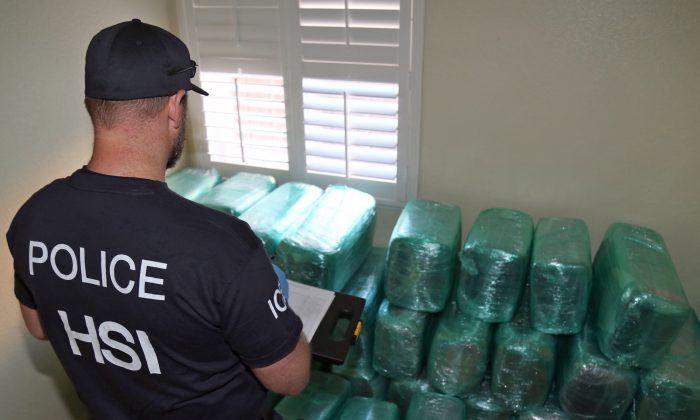 This photo provided by U.S. Immigration and Customs Enforcement shows an investigator Wednesday, March 23, 2016, viewing bags of marijuana stored in a room of a newly-built home in Calexico, Calif., the terminus of a cross-border tunnel that runs the length of four football fields to a restaurant in Mexicali, Mexico. (U.S. Immigration and Customs Enforcement via AP)
Crime and Incidents

SAN DIEGO—A nearly half-mile-long tunnel leading from Mexico to San Diego was discovered and more than a ton of cocaine and seven tons of marijuana was seized, the U.S. attorney’s office said Wednesday. Six people were arrested.

The tunnel extends 300 yards from a house in Tijuana, Mexico, to the border and then 500 yards on the U.S. side to a fenced lot in a San Diego industrial area.

The tunnel was equipped with a rail system, ventilation, lights and a large elevator, officials said. The exit on the U.S. side is about 3 feet wide and was covered by a trash bin.

The six people arrested in San Diego on Friday were charged with crimes involving drugs and construction of the tunnel.

The discovery demonstrates the enduring appeal of tunnels to smugglers, despite the significant time and money required to build one. Dozens of tunnels have been found along the U.S.-Mexico border in recent years, some equipped with hydraulic lifts and electric rail cars. Most of the tunnels found were in California and Arizona, many of them incomplete.

The San Diego-Tijuana region is popular because its clay-like soil is relatively easy to dig with shovels and pneumatic tools, and both sides of the border have warehouses that provide cover for trucks and heavy equipment.