Unemployment Benefits Extension to Run Out: A Snapshot
0 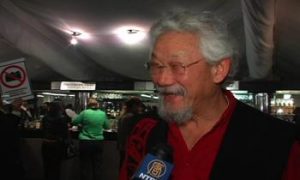 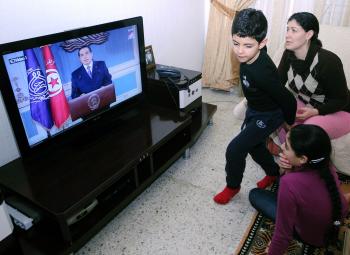 A Tunisian family watches a televised speech of President Zine el-Abidine Ben Ali. In an attempt to stop mounting protests in the country, Ben Ali promised to resign in 2014. But experts doubt whether Ben Ali will keep his promise. (Fethi Belaid/AFP/Getty Images)
Africa

By Epoch Times Staff
Print
He has held Tunisia in his grip for 23 years—leader Zine el-Abidine Ben Ali. But rare public protests, which have mounted over the past weeks, have threatened his previously iron-tight grip. In a struggle to avert an immediate overthrow of the government, Ben Ali announced on Thursday he will resign in 2014.

In a televised speech Ben Ali promised not to pursue another presidential term, and that he will grant freedom of press and order police to stop using live rounds on protesters.

All of these are in sharp contrast to what has been unfolding in Tunisia over the past weeks. At least 23 protesters have been killed at the hands of security forces. Protests started after Mohammed Bouazizi, a 26-year-old unemployed university graduate, set himself on fire after police confiscated the vegetables he was trying to sell to make an income.

“People have good reason not to believe him,” said Christopher Alexander, associate professor at Davidson College. According to Alexander, Ben Ali has made similar promises of freedom of press and democracy before, only to back-peddle on them later.

Alexander says it is now up to the protesters what to do next—whether they will take the promises at face value, or continue the protests. Alexander thinks Ben Ali’s real goal in making the promises is to “peel the people off the street, giving them the idea the protests had worked.”

Ben Ali also made sweeping promises last week, when he pledged to create 300,000 new jobs in an apparent attempt to quiet down protests against high unemployment rates.

The president’s tactics could work, says Alexander, who doesn’t think that the opposition movement is Tunisia is organized enough to form a credible alternative government, nor has it historically had a very broad base of support. “He [Ben Ali] is a thug and he deserves to go, but pragmatically if you don’t have an alternative ready to go you run the risk of pushing the country into chaos,” Alexander said.

Ben Ali came to power in 1987 in a bloodless coup, promising democracy, a non-lifetime presidency, human rights, and rule of law. However, halfway through the 1990s it became clear that he wouldn’t give up his power. In 2009, he won a fifth five-year term as president.

“Ironically, as the citizens of Tunisia are demanding greater freedom and a more transparent government, Tunisian authorities are engaging in shocking levels of repression, in particular unprecedented efforts to clamp down on access to information,” wrote Paula Schriefer, director of Advocacy at Freedom House, in a statement published last week.

Protest have been an uncommon occurrence over the past decades, but growing anger over corruption, poor living conditions, and lack of freedom have sparked mass protests throughout the country—despite the consequences.

The government crackdown recently extended to journalists and online activists, resulting in harassment, shadowing, and detention of at least three people.

“People on the inside are using everything at their disposal to get information out of the country,” said Mohammed Abdel Dayim, of the Committee to Protect Journalists. Videos showing clashes between protesters and security forces, and streets filled with fires and wounded protesters have appeared on the online video sharing website YouTube. According to Dayim, those posting the videos are very much aware they risk arrest.

At the beginning of the week, schools and universities were indefinitely closed, and a curfew has been imposed in Tunisia’s capital since Wednesday.