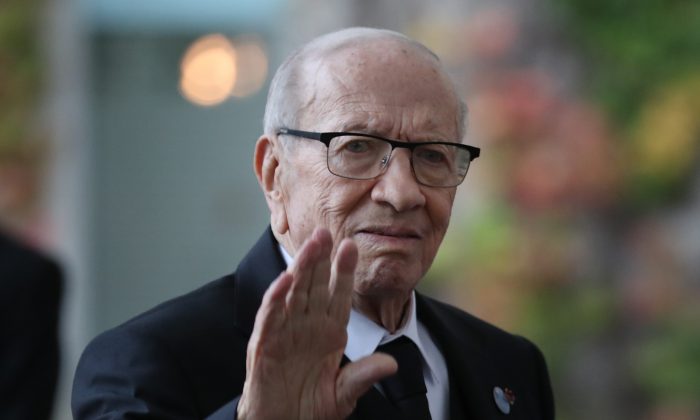 President of Tunisia Beji Caid Essebsi waves as he arrives at the Chancellery during the "Compact with Africa" conference in Berlin, Germany on Oct. 30, 2018. (Sean Gallup/Getty Images)
World

The succession plan is uncertain, and his death could lead to new power struggles in the only country to emerge from the 2011 Arab Spring uprisings with a functioning democracy and relative stability.

Essebsi died on July 23 at the Tunis military hospital, where he was taken the night before, presidential spokeswoman Aida Klibi told The Associated Press. The presidential Facebook page said funeral plans will be announced shortly.

Heir to Tunisia’s founding father, Essebsi emerged from retirement at age 88 to win office in 2014 in the wake of the country’s Arab Spring revolt. He presented his centrist Nida Tounes movement as a bulwark against rising Islamic fundamentalism and against the political chaos that rocked Tunisia after the “jasmine revolution” overthrew a longtime dictator and unleashed similar protests for democracy throughout the region.

But Essebsi was ultimately unable to bring prosperity or lasting calm to a country beset by economic crises and fending off sporadic deadly terror attacks.

Under Tunisia’s constitution, the president of the parliament, Mohamed Ennaceur, should assume the presidency for 45 to 90 days while a new election is organized.

However, first the Constitutional Court must confirm that the presidency is vacant—and the court itself doesn’t exist yet, because lawmakers disagree over who its members should be. So even as condolences poured in on social media for Essebsi, it was unclear Thursday who could take over as interim leader, or when.

In the meantime, Tunisian radio and television stations interrupted their programming to broadcast readings from the Quran.

Most of Essebsi’s political career came well before the Arab Spring uprisings and he outlived most of his peers in Tunisia’s independence generation.

Born Nov. 29, 1926, when Tunisia was a French protectorate, Essebsi entered politics in the 1940s and trained as a lawyer in Paris. But his name is most associated with Tunisia’s first president, Habib Bourguiba, who built up the country and educated its people yet brooked little opposition.

Essebsi proudly claimed to be Bourguiba’s disciple, and from 1965 to 1986, he held several senior roles including defense minister, foreign minister and interior minister.

As a supporter of openness toward more political pluralism, Essebsi occasionally clashed with Bourguiba, who was known as Tunisia’s “supreme fighter.”

After Bourguiba was overthrown in a bloodless coup by Zine el-Abidine Ben Ali in 1987, Essebsi left politics to be a lawyer and author, including writing a biography of Bourguiba. He was little heard from but never fully renounced his political ambitions.

Ben Ali’s fall in the Arab Spring of 2011 led to a difficult democratic transition for Tunisians. By the time Essebsi founded his own party in 2012—already deep into his 80s—many were ready for a familiar face.

However, not having a majority in parliament, Essebsi had to make an alliance with Islamist party Ennahdha, which caused discontent in his party and cost him a good part of his electorate.

Essebsi also angered many of those who labored to build Tunisia’s democracy by seeking to increase presidential power, despite a landmark 2014 constitution that created a strong parliament to keep the president’s authority in check.

And he remained ever loyal to his mentor, restoring Bourguiba’s statue to the central Tunis avenue that bears his name.

Tunisia remains a haven of political openness and relative peace compared to the strongmen elsewhere in the Arab world and the chaos reigning in Libya.

Still, the North African nation has gone through nine governments since the 2011 uprising, and each one has failed to resolve the country’s widespread poverty, unemployment, and disillusionment with democracy. Attacks by Islamic extremists, including some trained in neighboring Libya, have killed dozens and sent foreign tourists fleeing, damaging Tunisia’s key tourism industry.

“A democracy cannot be built in eight years,” he said in January. “Tangible results need time.”

In April, Essebsi announced he wouldn’t run in the November election, saying a younger person should lead the country.