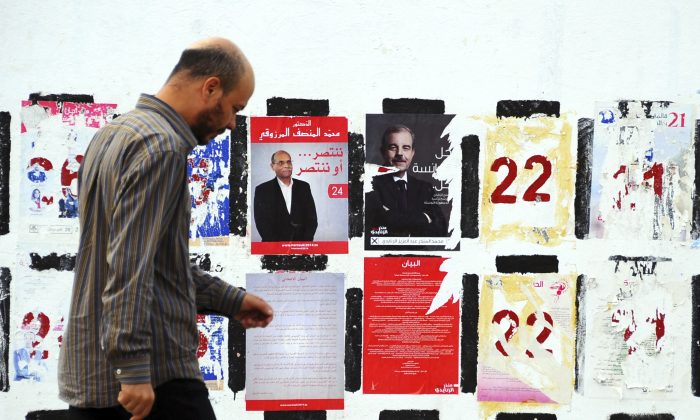 TUNIS, Tunisia—Campaign posters and banners for next week’s presidential elections have covered the walls of Tunisia’s cities and towns, papering over the flaking posters from the parliamentary elections just three weeks ago.

The presidential campaign, featuring 25 competitors, kicked off in early November and it’s the first time since Tunisians overthrew dictator Zine El Abidine Ben Ali in 2011 that they will choose their head of state through universal suffrage.

If no candidate wins a majority Nov. 23, there will be a runoff between the top two vote-getters on Dec. 28.

Alone among the countries that experienced the Arab Spring uprisings in 2011, Tunisia’s transition has remained on track.

The favorite to win is Beji Caid Essebsi, an 87-year-old veteran politician who served under Ben Ali and his predecessor Habib Bourguiba, and whose party won the most seats in parliament — 39 percent — in the October elections.

After 3 1/2 years of a stormy transition marked by high unemployment and terrorist attacks, Tunisians voted for Essebsi’s party Nida Tunis (Tunisia’s Call) hoping to bring back stability and prosperity.

Essebsi started his campaign in Bourguiba’s coastal home town of Monastir and evoked nostalgia for this towering figure of Tunisia’s history who won independence from France and created a modern state defined by a well-educated middle class — albeit with little room for dissent.

The possibility of an old-regime politician and his party controlling both the presidency and parliament has raised some concern.

“There are many fears of the return to the one-party state, of course,” said Michael Ayari, Tunisia analyst at the International Crisis Group. “There is a fear of returning to centralization, a single ‘pater familias’ (head of the household) who will become an omnipresent figure.”

Despite his age, Essebsi has been campaigning vigorously all over the country to packed stadiums, and Saturday night was no exception in the Tunis neighborhood of El Menzah, where a giant screen was set up for the many supporters who couldn’t enter the thundering stadium.

Essebsi told the cheering crowds that youth is a “state of mind” and that Tunisians will decide if he is fit enough to take the helm of the nation.

“We will not exclude any party,” he told the crowd, and addressing fears that his victory could usher a new era of one-party dominance. “Just as we reject violence, we are against exclusion,” he said.

Following their parliamentary election loss, Islamist leaders, many of whom were once imprisoned by colleagues of Essebsi, assured their rattled supporters that a police state was not returning.

Essebsi’s main competitor in parliamentary elections was the moderate Islamist Ennahda Party, which ruled during much of the nation’s stormy transition but finished second in the parliamentary vote. The party chose not to field or endorse a presidential candidate.

Under the post-revolution constitution, power resides largely in the hands of the prime minister and his parliamentary coalition. The president presides over foreign affairs and defense.

Candidates are uniformly promising to address Tunisia’s 15 percent unemployment — more than twice that for young people — and securing the country from attacks by extremists.

Moncef Marzouki, a veteran human rights activist who is now the interim president, is seeking a full term. His popularity and reputation have suffered over the past few years, however, and his party lost nearly all of its seats in the parliament. Yet as a lone warrior against Ben Ali’s dictatorship, he remains a symbol of the revolution and could become a rallying point against Essebsi.

Slim Riahi, the millionaire football club owner who used his money and the popularity of his team to lead his Free Patriotic Union to a surprise third place finish with 16 seats in parliament, could pull an upset. At 42, he describes himself as “new blood” for Tunisian politics and has promised mega-projects to bring employment to the neglected interior. He might get support from the young and working-class voters alienated from mainstream politicians.

Mustapha Kamel Nabli, an international economist and a former central bank governor, has attracted large crowds and could provide a respected alternative to Essebsi.

Kalthoum Kennou, a judge and former head of the country’s judges’ association, is the first woman to run for president in Tunisia. She said she is running to prevent members of the old regime from coming to power and to push harder for gender equality.

From The Associated Press. AP reporter Ben Wiacek contributed to this report.