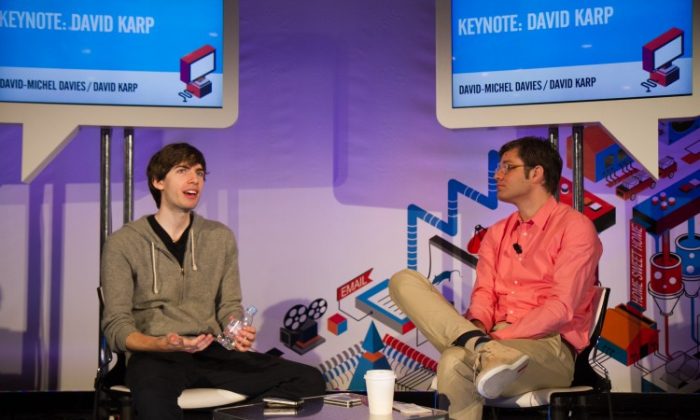 Tumblr and NYC: The Love Story

NEW YORK—Tumblr—that blogging site many don’t really get, or haven’t heard of—is for users that have things to share online and don’t necessarily enjoy writing, giving each user control over media with a personal domain that has its own URL. Each domain is known as a “Tumblr.”

“If you wanted to put something out there that was really you—and not YouTube slash username—if you didn’t want that vanilla white Facebook page, if you wanted your own domain, if you wanted to share any type of media—not just relegated to photos on Flickr or videos on YouTube—you had to use the blogging platforms,” explained David Karp, CEO and founder of Tumblr, referring to when he launched the site in February 2007.

“The blogging platforms at the time were geared toward writers, which I wasn’t,” he added.

During the first two weeks, 75,000 users signed up for Tumblr.

Headquartered in New York City and started by Karp, an Upper West Side native, the roots of the multimedia blogging platform are firmly planted in the city.

A plethora of Tumblrs feature the city as the main subject. Humans of New York, a well-known photography Tumblr, has shots of an eclectic mix of city folk. Short blurbs add flavor to the photos.

The following story accompanies a recent photo of an Qdoba employee.

“I made a quick stop at the Bleecker St. Qdoba today, and was served by this friendly man. I told him I was feeling fatigued, so I wanted a lot of vegetables.

“He said: ‘You know, it’s good to eat healthy. But I think so much of our health comes from our mental state. You hear about these old grandmas who drink hard liquor every day of their lives, but still live to be 98. You know why? Because they had less stress back then. I think the health of the body really follows the health of the mind.’

“Pretty profound stuff. But with that being said, I felt much better after eating my vegetable burrito.”

Some say Tumblr gives more exposure than other social media. As a comparison between Tumblr and Facebook, the Tumblr post of the Qdoba interaction was reblogged 426 times, while the Facebook post, although receiving 1,648 likes, was shared only 51 times.

“It’s something that represents part of what Tumblr is—really go in depth, and really explore the things that people are passionate about,” said Karp, referring to pages like Humans of New York.

“I really admire Tumblr because they put artists front and center,” said Brandon Stanton, of Humans of New York, via email. “They pay a lot of attention to the people who actually create content on their platform.”

He described frustration at the “inability to contact anyone” at Facebook, and feeling comfortable distributing his work with Tumblr since he’s “spoken with several members of the Tumblr staff about a myriad of issues.”

At 120 million monthly users and growing, Tumblr has attracted the city government, with a main nyc.gov page, the Department of Transportation’s The Daily Pothole, and the city’s open data site that makes information public so users can turn them into creative visuals.

Out of 100 employees at Tumblr, half were lured from other areas, including many from California, said Karp. The company tells potential employees, “Hey, just come hang out in New York for the weekend. New York is a lot cooler than Palo Alto.”

Proximity to the city’s media industry plays a big part, for Karp and the company, especially as Tumblr becomes more of a “media network,” he said.

Groups on Tumblr meeting up in real life has the company’s influence expanding outside the digital world. Meetups in the city this week include at Washington Square Park on Wednesday night, and one on Saturday at MetLife Stadium for the Electric Daisy Carnival on Saturday, and another off 47th Street.

“Getting to make those groups materialize in physical spaces is something I really appreciate,” Karp said.