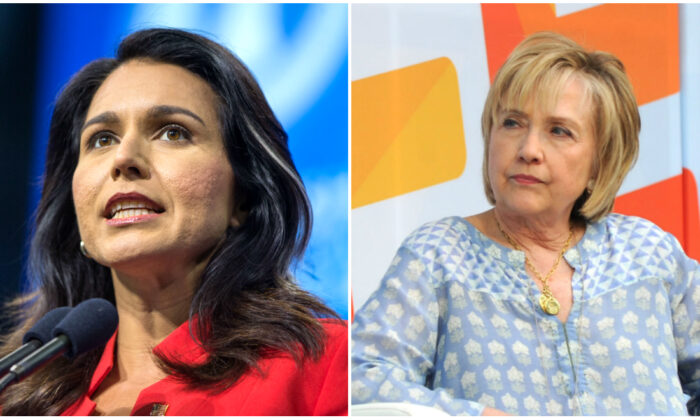 Rep. Tulsi Gabbard (D-Hawaii) has publicly hit out at Hillary Clinton and her allies in the Democratic Party establishment, vowing to take America back from the “corrupt elite.”

In a video posted on Twitter on Oct. 20, Gabbard, who is running for president, urged the public to help her reclaim the Democratic Party and root out corruption.

Gabbard said that Clinton’s smears against her since “day one” of her campaign can be traced back to her endorsement of Sen. Bernie Sanders in the 2016 election.

Hillary & her gang of rich, powerful elite are going after me to send a msg to YOU: “Shut up, toe the line, or be destroyed.” But we, the people, will NOT be silenced. Join me in taking our Democratic Party back & leading a govt of, by & for the people! https://t.co/TOcAOPrxye pic.twitter.com/TahfE2XOek

Gabbard resigned her post as a vice chairwoman of the Democratic National Committee (DNC) to be able to formally endorse Sanders for president three years ago.

“People warned me in 2016 that my endorsement of Bernie Sanders would be the end of my ‘political career,’” Gabbard said.

“They said, ‘Clinton will never forget,’ that ‘she and her rich and powerful friends, her allies in politics and the media, will make sure that you are destroyed.’”

In her video, the 38-year-old said ever since she defied the party, Clinton has been attempting to falsely portray her as a “traitor,” largely through “countless hit pieces full of smears.”

“They’ve tried to destroy my reputation and my lifetime of service because I stood up to them.”

Gabbard’s video, released Sunday afternoon, comes after the former secretary of state implied in an interview last week that Gabbard is a favorite of the Russians.

Clinton said during an interview on Oct. 18, without presenting any evidence, that Russia has “got their eye on somebody who is currently in the Democratic primary and are grooming her to be the third-party candidate.”

She later said that person, who commentators have identified as Gabbard, is “a Russian asset,” along with Jill Stein, who ran for president in 2016 in the election that Clinton lost to President Donald Trump.

Gabbard, who served in the military, later said during an appearance on Fox News’s Tucker Carlson Tonight: “Let me tell you what this is about: this is about Hillary Clinton sending a very strong message because I am and have long been calling for an end to our country’s foreign policy of waging one regime change war after the next, the likes of which we’ve seen in Iraq, and Libya, and ongoing in Syria, and because I’m calling for an end to this new cold war and nuclear arms race, that I am a Russian asset and I am a traitor to the nation I love.

“Not only are they saying that about me, they are basically sending this message out to every veteran in this country, every service member, every American … who is fighting for peace,” she added.

The reason Clinton tried smearing her as working with Russia, Gabbard alleged, is that the former secretary of state knows she can’t “manipulate” the outsider candidate.

Great! Thank you @HillaryClinton. You, the queen of warmongers, embodiment of corruption, and personification of the rot that has sickened the Democratic Party for so long, have finally come out from behind the curtain. From the day I announced my candidacy, there has been a …

“Thousands of my brothers and sisters in uniform were killed in Iraq, a war that she championed. Their blood is on her hands. I am calling for an end to these regime change wars, this is why she’s speaking out strongly and smearing my character and trying to undermine my campaign.”

Clinton’s claims echoed those made by CNN analyst Bakari Sellers who accused Gabbard of being “a puppet for the Russian government” during a CNN panel discussion before the Oct. 15 debate.

Meanwhile, The New York Times in an Oct. 12 story said the 2020 candidate’s threat to boycott the Democratic debate on Oct. 15 caused some Democrats to “worry about supportive signs from online bot activity and the Russian news media.”

In her video, Gabbard continues to say that the party establishment sends across a message that “if you stand up against Hillary and the party power brokers, if you stand up to the rich and powerful elite and the war machine, they will destroy you and discredit your message.”

She continues to say she is running for President in 2020 “… to take the Democratic Party and our country back from the corrupt elite.”

“I’m running for president to bring about a New Democratic Party, a new leadership that will fight for peace, fight for the people, and protect our planet.”

Gabbard ends her social media video by urging the public to “root out the corruption in our party and our country.”

“Join me to end the war machine’s stranglehold over our leaders, and ensure that our government is truly of the people, by the people, and for the people.”