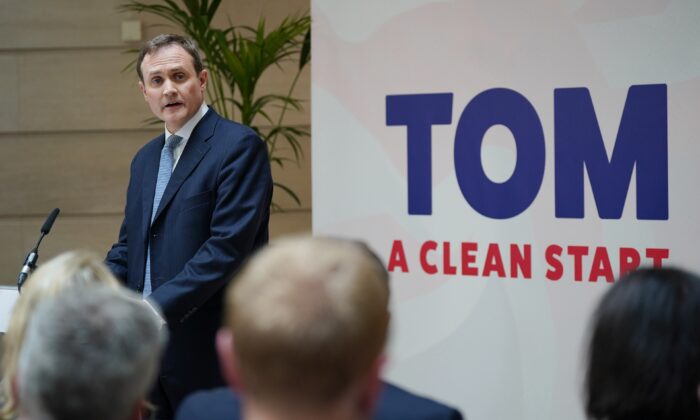 Tom Tugendhat speaking at the launch of his campaign to be Conservative Party leader and Prime Minister, at 4 Millbank, London, on July 12, 2022. (Yui Mok/PA Media)
UK

After barely surviving the second round of field-narrowing votes on Thursday, Conservative Party leadership hopeful Tom Tugendhat said he will stay in the race.

Tugendhat secured 32 votes from his colleagues, the fewest among the five remaining candidates, but the former soldier said he had never turned down a challenge because the odds were against him, adding, “I don’t plan to start now.”

Tugendhat confirmed he will attend all three televised debates on Friday, Sunday, and Monday, saying “candidates and our ideas should be scrutinised.”

After Chancellor Nadhim Zahawi and Former Health Secretary Jeremy Hunt were eliminated in the first round of votes on Wednesday, Attorney General Suella Braverman became the third candidate to be knocked out of the race after securing only 27 votes.

Former Chancellor Rishi Sunak remains the frontrunner to replace Prime Minister Boris Johnson after securing 101 votes, 13 up from the day before.

Trade Policy minister Penny Mordaunt come in second again, enjoying support from 83 Conservative MPs, 16 up from the day before.

Johnson was forced to quit on July 7 after a series of scandals triggered an avalanche of government resignations.

Having not served in any government roles, Tugendhat argues his positon as an outsider would give the Conservative Party “A Clean Start”—the tagline for his campaign.

“We need trust back in our politics. I will be putting my vision for Britain forward to the public at the TV debates next week.

There has been suggestions that Badenoch and Braverman may have come under pressure to merge their campaign with Truss, but Badenoch has said she will stay in the race.

After gaining nine additional votes on Thursday, Badenoch wrote on Twitter: “I am delighted that a growing number of my colleagues have faith in my vision for a return to honest politics and conservative principles. Thank you for your support.

“Now is the time for change and I am looking forward to continuing to make that case in the TV debates,” she said.

Braverman declined to back a candidate after she was eliminated, saying she was the only “authentic Brexiteer” and that she has to weigh the pros and cons of the remaining candidates before picking one to support.

Three televised debates among the five candidates will be held on Channel 4 on Friday, ITV on Sunday, and Sky on Monday.

Conservative MPs will take a third vote on Monday, with further votes if necessary, to produce two final candidates by July 21.

Wider Conservative Party members will then choose the winner by Sept. 5, and Johnson will formally ask the Queen for permission to resign on the next day.