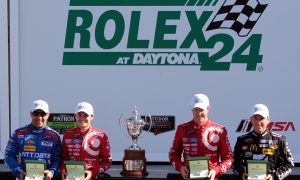 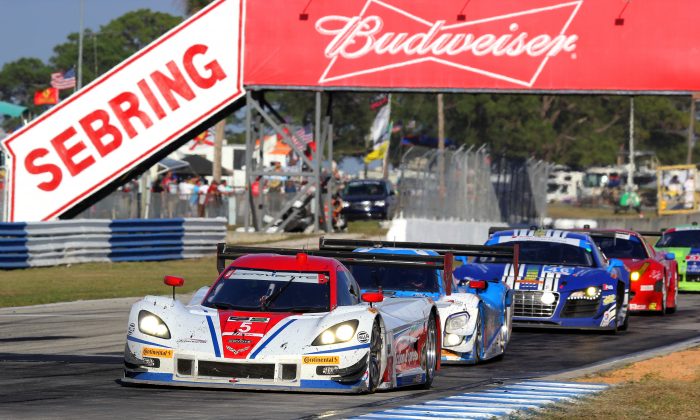 Action Express will be back after winning the 2014 Prototype championship and the North American Endurance Cup. The Ganassi #01 (second in line) will want to defend its 2014 Sebring win. (Chris Jasurek/Epoch Times)
Motorsports

The Tudor United Sports Car Championship will be running the 63rd Twelve Hours of Sebring this weekend—the second race of its second season, the oldest and arguably the most iconic on its schedule. What can it offer this year, having learned from last season?

Based on the success of the 2015 24 Hours of Daytona, it seems safe to assume the race will offer quite a lot.

Now in its second season, the Tudor Championship has worked through many of the teething problems its first season presented. Based on the 2015 season-opening Rolex 24 at Daytona, issues of class balance and officiating have (hopefully) been relegated to the past; the 2015 Rolex 24 was a solid endurance race, with the teams which made the fewest errors and made the quickest recoveries coming out on top—exactly how endurance racing is supposed to work.

Add to that a solid grid and the prediction of perfect weather, and the 2015 Twelve Hours of Sebring could be the race fans hoped for in 2014.

Plenty of Errors to Learn From

The Tudor United SportsCar Championship, a combination of the failed American Le Mans Series and Rolex Sports Car Series, did not have a particularly auspicious debut in 2014. Its first race, the Rolex 24, was a decent if uninspiring race until a questionable late-race caution and a hasty penalty, rescinded several hours later, marred the finish

The Tudor Series’ first attempt at the Sebring 12 Hours did not run smoothly at all. To start with, Ben Keating’s Riley Motorsports Viper caught fire early in the race, and burned to a crisp while fire marshals waited for word from the booth to go on track—a sensible safety precaution, but to spectators the delay in reacting seemed unusually long. This exacerbated a debate among teams and fans started when Tudor scrapped the old policy of having a dedicated traveling safety team.

In all about half the race ended up being run under cautions, which is partly just bad luck (and some bad driving) but also highlighted Tudor’s complicated yellow-flag procedure and its unwillingness to use local cautions.

On top of all that, officials made a pair of huge (and this cannot be over-emphasized) officiating errors by penalizing the AJR Porsche for a collision caused by the #911 PNA Porsche, and then penalizing the #912 PNA Porsche for the same foul, while the actual offending car was never penalized.

Tudor spent the rest of the season making adjustments, and based on how the 2015 Rolex 24 proceeded, all the problems have been fixed. Officials used local yellows to let drivers recover from small errors instead of stopping the race and a new review process ended erroneous penalties.

Most important Tudor seemed finally to get the balance between its two types of prototype chassis correct at Daytona—after a year of imbalance, it seemed during the Rolex that a P2 or a Daytona Prototype could have an equal chance to win.

Of course, Daytona is a track like no other, and a new balance will need to be struck for Sebring, but Sebring, without Daytona’s long banked sections, won’t offer the challenges Daytona does.

As of March 10 47 cars are entered—six fewer than Daytona—but that is to be expected. Ganassi has entered only one Riley-Ford Ecoboost, and RG racing did not enter its Riley BMW. Otherwise the prototype class is identical to the Rolex 24 entry. The NASCAR stars are gone, but IndyCar’s Justin Wilson will be taking a turn or two in the #60 Shank Racing Ligier-Honda and 2014 IndyCar champ and 2015 Rolex 24 winner Scott Dixon will co-drive the #01 Ganassi Riley-Ford.

SpeedSource Mazda will return with its pair of SkyActiv diesels. The team showed good speed at Daytona; Sebring should suit their cars even better.

The DeltaWing DWC13will also be back. This car too showed good speed at Daytona but succumbed to mechanical failure.

In GTLM, AF Corse is entering only a single Ferrari 458. IndyCar stars Ryan Briscoe and Simon Pagenaud will be back with Corvette Racing, Briscoe in the Rolex-winning #3 C7.R, Pagenaud in the #4. Porsche factory driver Patrick Long will again be co-driving the #17 Falken Tire Porsche, and ALMS P1 champion Lucas Luhr will join the RLL Team BMW #24 Z4 GTE squad.

Prototype Challenge is the same as at Daytona, save Bar1 is entering only a single Oreca-Chevrolet. In GT Daytona, Scuderia Corsa has only a single entry, and Konrad Motorsport has not entered its Porsche GT America.

One unhappy note: Extreme Speed Motorsports won’t be back with its pair of HPD ARX-04bs. The new cars, which were barely delivered in time for Daytona, simply weren’t sufficiently developed. The new cars will be shipped back to the factory, while the team will dust off the ARX-03bs it ran in 2014. (ESM finished second last year, so while the new cars might have more development potential, the 03bs still have the potential to win.)

The Tudor Championship is the latest in a chain of North American sports car racing series stretching back to the 1960s Hopefully Tudor management has learned from its forbears and will succeed where each of them eventually failed.

One thing the Tudor folk have realized is that fans who can’t make it to the track still want to watch the race Thanks to a deal between Fox Sports and Tudor, the entire twelve-hour race should be available to fans in North American and worldwide either on cable TV or via the Internet.

Fox Sports Two picks up the action at 10 p.m. and broadcasts the end of the race and winners’ interviews.

Tickets for the 63rd 12 Hours of Sebring are available online at Sebring Raceway‘s website.