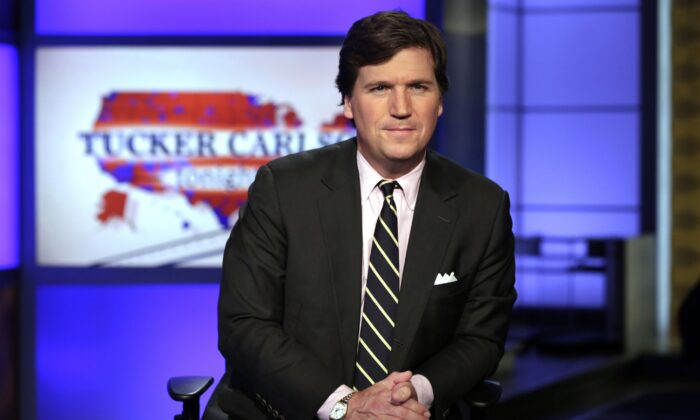 Fox News host Tucker Carlson responded to speculation that he would run for president in 2024, saying that he has no interest in doing so.

“Oh God, come on! Yeah. I’ll be running,” Carlson said sarcastically when asked about the prospect on the “Ruthless” podcast.

The Fox commentator then listed the reasons why he wouldn’t embark on a political career, noting that his family members would likely oppose it.

“That seems like a fun job. I’m sure my poor children would love that. Can you imagine?” Carlson said during the podcast. “I’ve known and talked to every president, you know, for a while, for like more than 30 years. And you know, I can’t think of anyone whose life was improved by that.”

Carlson said he would run if he “was the last person on earth,” noting that it “seems pretty unlikely that I would be that guy.” The pundit noted that he is a “talk show host” and enjoys his job.

It’s not the first time Carlson, who hosts one of the most popular shows on cable television, has publicly denied rumors claiming he would run for president. Due to his popularity among conservatives and Republicans, he’s sometimes been listed as a potential successor to the mantle that was once held by former President Donald Trump.

In 2019, Carlson shot down speculation during a National Review interview, saying: “I would be insane to run for president.”

The Fox host made the comment when answering questions about how GOP politicians can generate more votes and interest.

“If I were advising someone who was running for president, I would say make that the centerpiece of your campaign. Vote for me and you can raise your own kids,” Carlson said.

And during an interview in August 2020, Carlson made a similarly dismissive remark to a question about running.

“No I’m not running for anything—come on,” he told Mediaite’s podcast.

“He’s a talented communicator with a massive platform. I think if he runs, he’d be formidable,” Luke Thompson, a Republican strategist who had worked for Jeb Bush’s super PAC in 2016, said during an interview last year.

The comments about Carlson last year came in the midst of his nightly criticism of the Black Lives Matter demonstrations and riots across U.S. cities in the wake of George Floyd’s death.

Carlson’s show has of late remained a ratings juggernaut for Fox News. In all of May, his show was the most-watched cable news program, with an average total audience of nearly 3 million viewers, according to Neilsen data. Carlson also won the ratings battle in April, averaging more than 3 million viewers across the month.