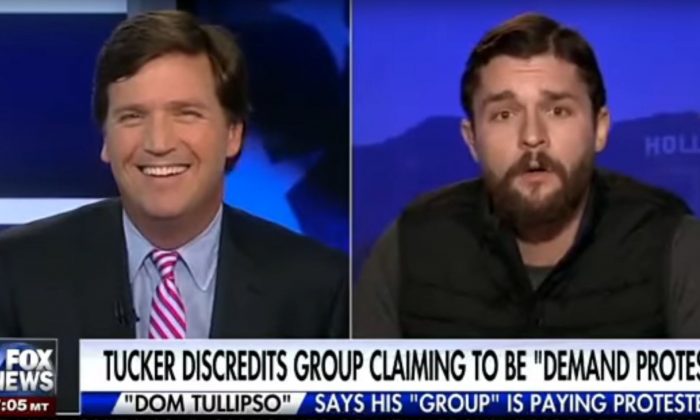 Tucker Carlson brought on a so-called anti-Trump activist for an interview on his Fox News show interview.

But Carlson started off by saying the guest, “Dom Tullipso,” isn’t his real name after researching him.

“So this is a sham. Your company isn’t real. Your website is fake. The claims you have made are lies. This is a hoax,” Carlson told him. “Let me start at the beginning however with your name, ‘Dom Tullipso,’ which is not your real name. It’s a fake name. We ran you through law enforcement level background checks and that name does not exist.”

“So let’s start out with the truth, tell me what your real name is.”

Tullipso claims to be head of a group called Demand Protest, which explains on its website: “When your strategy demands paid protest, we organize and bring it to life.” A few conservative websites picked it up, but others noted that it appears to be a hoax.

Carlson then told him there was no way he could be paying employees $2,500 per month, which would amount to him paying tens of millions of dollars per year.

After that, it starts to unravel.

“We are greatly, greatly supportive of national treasures such as Julian Assange, Edward Snowden, and Peyton Manning, and we really support their efforts to really get the truth out there, and in the case of the current client we have right now, uh, that client is, um, very interested in releasing the Roswell papers,” he said, referring to the two-time Super Bowl winning quarterback, Peyton Manning.

Later, he states: “We shifted from being against Trump to Trump about 30 minutes ago.”

Carlson, laughing, then began to play along with the hoax.

“We are now supporting Trump in the hope that the Roswell documents from 1947 are finally released and put back into the hands of Fisher Stevens,” he added.