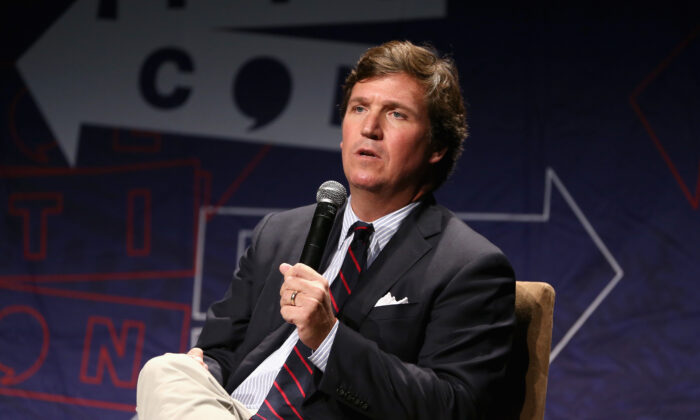 Fox News host Tucker Carlson claimed Wednesday that his identity was “unmasked” by the National Security Agency (NSA) after he attempted to schedule an interview with Russian President Vladimir Putin.

During his popular cable television show, “Tucker Carlson Tonight,” Carlson confirmed that he “contacted a couple of people I thought could help get us an interview with Russian President Vladimir Putin.”

He said he told only his executive producer about the plans, because he “figured that any kind of publicity would rattle the Russians, and make the interview less likely to happen.”

“I wasn’t embarrassed about trying to interview Putin,” Carlson said. “He’s obviously newsworthy. I’m an American citizen, I can interview anyone I want, and I plan to. But still, in this case, I decided to keep it quiet. I figured that any kind of publicity would rattle the Russians and make the interview less likely to happen. But the Biden administration found out anyway by reading my emails.”

The television host claimed that he was informed by a “whistleblower” that the NSA intended to leak his emails to media outlets in an attempt to “paint me as a disloyal American, a Russian operative (I’ve been called that before), a stooge of the Kremlin, a traitor doing the bidding of a foreign adversary.”

“That was the point they wanted to make,” Carlson continued. “That’s why they planned to leak the contents of my emails to news organizations and yesterday, as noted, we learned they actually did it.”

Carlson’s latest claims come days after the NSA in a rare statement denied that it had been spying on him “in an attempt to take this show off the air.”

“Tucker Carlson has never been an intelligence target of the Agency and the NSA has never had any plans to try to take his program off the air,” the NSA said in a statement on Twitter at the time.

“NSA has a foreign intelligence mission. We target foreign powers to generate insights on foreign activities that could harm the United States,” the agency added. “With limited exceptions (e.g. an emergency), NSA may not target a U.S. citizen without a court order that explicitly authorizes the targeting.”

Carlson initially on June 28 accused the agency of having monitored his electronic communications and accessing some of his personal emails.

“People in the building learned who I was, and then my name and the contents of my emails left that building at the NSA and wound up with a news organization in Washington. That is illegal. In fact, it is precisely what this law was designed to prevent in the first place … We cannot have intelligence agencies used as instruments of political control.”

Carlson on Wednesday demanded that NSA Director Gen. Paul Nakasone and Director of National Intelligence Avril Haines immediately “explain who asked” for his identity to be unmasked.

“You can’t have a democracy in a place where unaccountable spy agencies keep people in line by leaking the contents of their emails, discrediting them with their own emails, which they thought were private,” he added. “You can’t. It doesn’t work if you allow that.”

The NSA declined to comment on Carlson’s latest remarks.