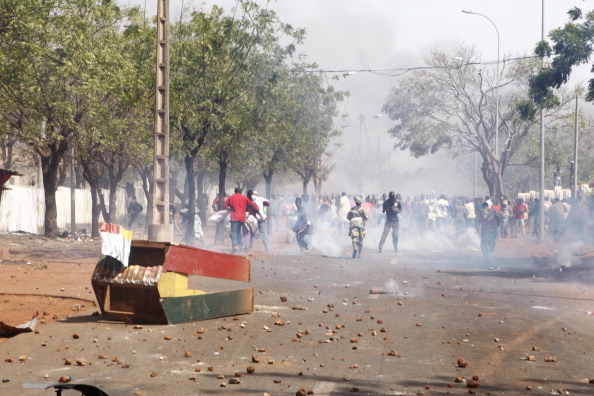 Relatives and supporters of soldiers fighting rebels Tuareg in the north, clash with security forces during a protest against the "weak" response to attacks by the rebels, in Bamako on February 2, 2012. (STRINGER/AFP/Getty Images)
Africa

Tuaregs tribal militants who may have fought alongside Moammar Gadhafi’s forces have moved into northern Mali and taken up strategic positions against the city of Kidal, according to media reports.

A nomadic tribe who dominated trade in North and West Africa for thousands of years, the Tuaregs have been displaced due to a variety of reasons, including the creation of national borders, desertification, urbanization.

Mali President Amadou Toumani Toure, via the state-run television, told Malians on Monday not to carry out reprisal attacks on Tuareg ethnic members, saying not to confuse the rebels with “peaceful citizens,” reported the L’Essor newspaper.

Mali officials placed Kidal on alert against a potential attack on Monday after rebels attacked several towns and positions, after years of peace, reported Al-Jazeera television. Aid groups in the region say that more than 15,000 people have been displaced due to the violence.

On Friday, the International Committee for the Red Cross said at least 10,000 fled from Mali and Niger due to the fighting between Mali’s army and the rebel groups. “Many of these people are women or children. Their shelter is rudimentary, and they lack water and especially food,” said Jurg Eglin, regional head of the Red Cross, in a statement.

Around 800 Tuareg fighters were enlisted by Gadhafi’s regime over the years and during last year’s civil war. They have taking weapons back with them from Libya, according to intelligence security firm Stratfor. The militants have said they want their own state.

Tuaregs are also involved in drug smuggling and human smuggling and are suspected of having ties with al Qaeda in the Islamic Maghreb.

Last month, Tuareg rebels launched another rebellion against Mali and began a series of assaults on targets held by the government, saying the decision was due to the breakdown of talks between the two parties, reported Stratfor. At least 47 people were killed in mid January.

Tuareg fighters attempted to carve out of a section of Mali during an uprising between 2007 and 2009, continuing a trend that took place in previous decades.

The U.S. State Department in a statement last Friday said it is “deeply concerned by continuing incidents of violence in northern Mali,” and condemned the attacks.

“These actions, taken by groups who purport to defend the rights of Malians, instead threaten the well-being of all Malian citizens,” it adds.