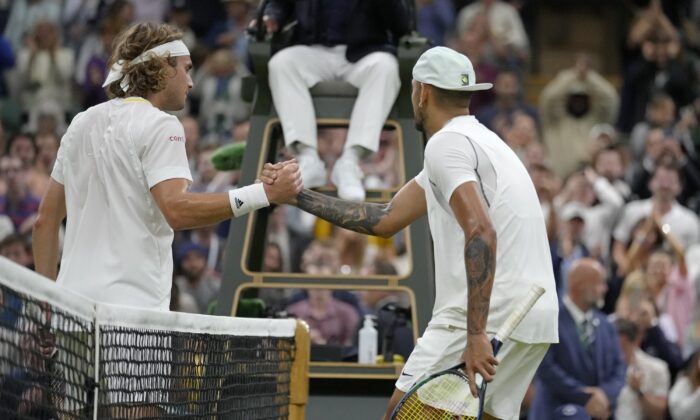 Australia's Nick Kyrgios shakes hands at the net with Greece's Stefanos Tsitsipas after winning their third round men's singles match on day six of the Wimbledon tennis championships in London on July 2, 2022. (Kirsty Wigglesworth/AP Photo)
Tennis

Tsitsipas, Kyrgios Both Fined After Heated Match at Wimbledon

Stefanos Tsitsipas was fined $10,000 by the All England Club, and Nick Kyrgios was docked $4,000 for actions during their wild third-round match.

The tournament announced the penalties on Sunday, a day after Kyrgios beat Tsitsipas in four sets. Things got testy during the match—and there was more dislike for each other expressed during their news conferences.

Tsitsipas’s fine was for unsportsmanlike conduct; he twice was warned by chair umpire Damien Dumusois for ball abuse. Two such code violations automatically result in losing a point.

Kyrgios lost money after Dumusois cited him for an audible obscenity. This was Kyrgios’ second fine of the tournament. He was penalized $10,000 for spitting in the direction of a spectator he said was heckling him during a first-round victory.